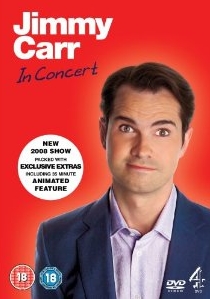 Bone dry, diffident but never not funny Jimmy Carr knows how to make a crowd explode into laughter with strings of exquisite and generally rather tasteless one-liners. Jimmy has blossomed into one of the most polished performers in the business, with his impish drive to mock and amuse his audience shining through in this new DVD, recorded live earlier this year at London's Bloomsbury theatre during his 2007/2008 Repeat Offender tour, in which he performed to over 250,000 people throughout the UK.

No one writes sharper or meaner jokes and no one delivers them better than Jimmy. He commands his audience with twisted little aphorisms, "the sort of thing you might find in a fortune cookie baked by Satan" (Sunday Herald), with no-one escaping his biting, withering sarcasm and take-no-prisoners approach to subject matter.

With his machine gun fast delivery, Jimmy walks a fine line with truly outrageous gags that would be thoroughly offensive if not so expertly delivered with an ironic glint in his eye, demonstrating the length and breadth of his comedy credentials. Of the new title, Jimmy says: "This DVD is exactly the same as last year's except every single word. It's rude, crude and offensive but those aren't the only reasons you'll enjoy it."

Slick, sick and definitely not for the easily offended, Jimmy offers a true masterclass in comedy as he takes his dry and sardonic wit to a whole new level. He unleashes a stack of tongue-in-cheek gags which more often than not are completely un-PC - but all successfully carried off by crediting his audience with enough intelligence to be in on the joke and able to keep up.

The release also includes a stack of exclusive DVD extras, including a specially commissioned 36-minute cartoon - a montage of Jimmy Carr's most brutal audience putdowns - brought to life by Jimmy drawn in various different animated guises. Here we get to see Jimmy, amongst other things, as a life-sized puppet, Jimmy 'cartoonised', line drawn and sketched Monty Python-style as he battles and belittles audience members who have dared to heckle! There's also nine bespoke static cartoon comic strips of Jimmy's best gags as well as hilarious alternative subtitles - Scouse, Glaswegian, Polish, Australian and Welsh.

Jimmy has risen to become one of the most original and distinctive stars of British Comedy, developing the unique brand of perfectly timed one-liners and deadpan delivery for which he has become so well known. He has previously sold over 650,000 DVDs to date and played to well over half a million people live.

It's been another manic year for Jimmy. He is currently presenting Commercial Breakdown Sunday evenings on BBC1, and continues to host a sixth series of hit Channel 4 show Eight out of Ten Cats, established as a huge ratings winner with over 3.5m viewers tuning in to its Friday night edition. Jimmy will be presenting another series this autumn - 13 episodes from early September to late November.

In addition to his much-applauded appearances on our screens, in August 2008 Jimmy launches his brand new live tour, Joke Technician. Never one to recycle jokes, the 180 date Joke Technician tour will contain all-new, unseen material. So, people who have bought the new DVD can still come and see Jimmy live and enjoy a whole new set of jokes.

A household name in the UK, Jimmy is also a rising star in the US, where his profile continues to grow. This Summer Jimmy records a half-hour Special for Comedy Central to be filmed end of August. He has also recorded two successful series of game show Distraction, which also aired on Comedy Central and continue to get repeated. Jimmy has also appeared four times on NBC's flagship programme The Tonight Show with Jay Leno and five times on NBC's Late Night with Conan O'Brien. Last July Jimmy performed at the Montreal 'Just for Laughs' Comedy Festival for his fourth time, performing his full length show 'Gag Reflex' across six sell out nights.

Over the past few years, Jimmy has deservedly earned his place amongst the premiere league of British comics. His stand-up achievements to date include a British Comedy Award for best Live Stand Up Tour, a Loaded LAFTAS Award for Best Stand Up (in both 2006 and 2007), a Perrier Award nomination, Best Stand Up at the Time Out Awards and Best on Screen Newcomer from the Royal Television Society. Jimmy's other TV accolades include the prestigious Silver Rose of Montreux award and a Rose d'Or nomination for Best Host at last year's awards.