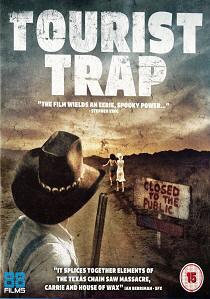 An eerie and deserted wax museum, Slausen's Lost Oaisis, is the site for spine-tingling terror where four unsuspecting young travellers (Including Tanya Roberts from A View to a Kill and Charlie's Angels) are lured into a very deadly Tourist Trap.

Slausen (Chuck Conners - Soylent Green, Airplane 2) is the reclusive and bizarre owner of this attraction, which is actually more like a macabre chamber of horrors. The grotesque and frightening mannequins in this sordid side-show are only the beginning of the murderous mayhem and nightmarish madness to come.

Tourist Trap is released for the first time on Blu-ray on 21st April 2014, courtesy of 88 Films.