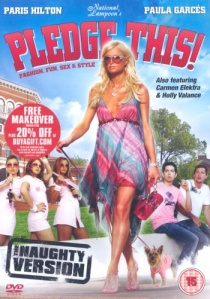 Released by Lionsgate Home Entertainment on 12th March 2007 and starring the infamous Paris Hilton (Simple Life, House of Wax) Pledge This! is the brain child of the team behind the hilarious National Lampoon franchise.

Set at South Beach University, the story follows the Gamma Gamma sorority in their fight to be crowned America's hottest sorority by FHM magazine. As president of the sorority, Victoria (Paris Hilton) has only one dream - to be an FHM cover girl. Glamorous, sexy and viciously ambitious, she's not going to let anything or anyone, stand in her way but will her evil plan backfire and reveal that the girl who seems to have it all isn't everything she pledged herself to be?

Watch these gorgeous girls go head to head as they undertake some of the most outrageous pledge tests ever seen on screen and battle it out for the ultimate prize!