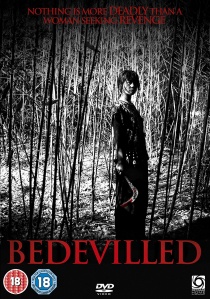 Bedevilled, released by Optimum Home Entertainment on 28th February 2011, is a film with excruciating suspense leading to a gore leaden whirlwind of violence starting with Hae-won (Ji Sung-won), a middle management woman who with the increasing pressures of work and home situation decides to take a break from it all and return to the pleasant, remote island that she spent happy summers with her grandparents.

Arriving she finds her childhood friend Bok-nam (Yeong-Hie So). Ecstatic to see her friend, Bok-nam begs her to help her and her child escape from the island. Perplexed Hae-won ignores her pleas but is shocked to witness the horrific torment that Bok-nam endures every day.

Each woman is stretched to their limits and it is only a matter of time before one finally, and gruesomely, snaps. Jang Cheol-so delivers a brutal, emotionally shattering film that blends humour, suspense, drama and horror into a seamless whole.