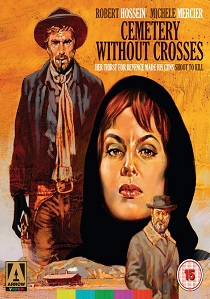 Inspired by the international success of the Dollars trilogy and dedicated to director Sergio Leone, Cemetery Without Crosses, released by Arrow Films on 20th July 2015 on dual-format DVD and Blu-Ray, offers a Gallic spin on the Spaghetti Western formula thanks to its star and creator, Robert Hossein (best-known to English-speaking audiences for his role in Jules Dassin's Rififi).

After her husband is lynched by bandits, Michèle Mercier (Mario Bava's Black Sabbath) seeks revenge and turns to an old friend, played by Hossein, for help. A solitary figure who lives in a ghost town and dons a single black glove before each gunfight, Hossein is initially reluctant but soon infiltrates the widow s enemies to force a showdown.

Cemetery Without Crosses is a darker breed of Western, bleak and melancholy in tone amid the explosive set pieces. It also boasts an outstanding score by composer André Hossein (father of Robert) and the catchiest of themes, sung by cult figure Scott Walker.