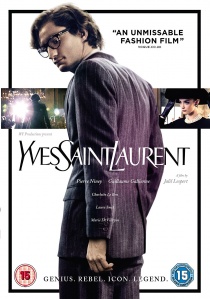 Discover the man behind the style in the must-see fashion film of the year, as Yves Saint Laurent arrives on DVD on 14th July 2014 from Entertainment One. For fans of Coco Before Chanel and The September Issue, this impeccably styled official biopic of the late designer Yves Saint Laurent tells the untold story of one of fashion's greatest legends.

Directed by Jalil Lespert (Headwinds) and starring French newcomer Pierre Niney (It Boy) in the title role, this visually sumptuous film begins in Paris, 1957. The film charts YSL's career from his early years at Dior in the late 1950s through to his iconic Ballet Russes collection of 1976. The world of the late 1950s is perfectly captured with elegant Dior designs, stylish models and a jazz score that matched the chic Parisian apartments the fashionistas inhabit.

During one of his highly successful and ground-breaking shows, Yves meets Pierre Bergé (played by Guillaume Gallienne; Marie Antoinette) - who will become the future love of his life and business partner. Three years later, they created the Yves Saint Laurent Company, which became one of the most famous brands in fashion and luxury.

Despite his own doubts and demons, Yves managed to turn the sleepy world of fashion upside down and change the way women dress forever.

Based on the book by Laurence Benaim, Yves Saint Laurent is a sheer delight for any fashion followers, with many breathtaking pieces taken from the original Saint Laurent archives in Paris to be used in the film. Pierre Niney is also supported by an equally well-cast ensemble, including a louche Nikolai Kinski as Karl Lagerfeld, and doe-eyed beauty Charlotte Le Bon as Saint Laurent's muse Victoire Doutreleau.

This stylish, elegant and candid film is a fitting tribute to the man who became a true industry icon, so make sure you get your fashion fix this July when Yves Saint Laurent arrives on DVD on 14th July 2014.