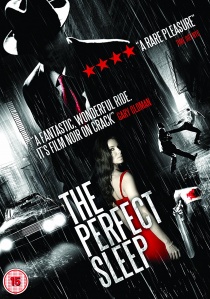 NewsMusic
News Article Go back to homepage
The Perfect Sleep, released on DVD by Icon Home Entertainment on 26th July 2010, is the directorial debut feature from Jeremy Alter and is a stylish, contemporary film noir that owes as much to Shakespeare as it does to the works of Dashiell Hammett and Raymond Chandler.
James Hart, Ryan Fitzgerald, Ken Clark, David Beck, Anthony Dilio, Anton Pardoe
Jeremy Alter
Anton Pardoe, Keith Kjarval, C. Steve Goldstein, Jeremy Alter
Icon Home Entertainment
1 hour 39 minutes
26/07/2010
Thank you for supporting DVD365.net when you order using the link(s) below. As an Amazon Associate we earn from qualifying purchases
Buy DVD
Information

The Perfect Sleep, released on DVD by Icon Home Entertainment on 26th July 2010, is the directorial debut feature from Jeremy Alter and is a stylish, contemporary film noir that owes as much to Shakespeare (references to Hamlet, Othello and King Lear abound) as it does to the works of Dashiell Hammett and Raymond Chandler.

A co-producer of 'Inland Empire' and location manager on 'Lost Highway', director Alter also wears his Lynchian influences on his sleeve as he presents star and scriptwriter Anton Pardoe's (himself a location assistant on 'Lost Highway') hard-boiled, noirish world of ruthless gangsters, femme fatales and morally unsound detectives as a dark and vivid dreamscape full of tormented characters.

In a timeless, unidentified city (which may or may not be Los Angeles), a man with no name (Pardoe) returns to the violent, brutal domain of gangsters and assassins he left ten years before, back when they dubbed him The Mad Monk for his disregard for his own life and his intense devotion to one woman, Porphyria (Roselyn Sanchez). The girl he grew up with and the love of his life, Porphyria is now a beautiful woman - the only thing he has ever wanted and the one thing he can never have. She, alone, is the reason for his return. Her life now in danger, he is the only man who can save her.

But waiting for him are several killers who would like nothing more than to see him die a painful death, while standing at their forefront is the formidable Nikolai (Patrick Bauchau), the man who raised him and just might be his father. To protect Porphyria, this unnamed man must revisit his former life of torment and torture and confront the father figure he turned his back on so many years ago. Co-starring Roselyn Sanchez (Without A Trace), Patrick Bauchau (2012), Peter J. Lucas (Inland Empire) and Michael Pare (the Bloodrayne movies), The Perfect Sleep is a dreamy, often nightmarish, film noir enhanced by stunning cinematography, ethereal locations and a cool, atmospheric musical score by David Vanian, the frontman of punk-goth legends, The Damned.

HotDVDBD
From the producers of Nobody and John Wick comes a bare-knuckle, coal-dark holiday action-comedy that says you should always bet on red as Violent Night sledges in on DVD and Blu-ray 6th March 2023 from Warner Home Video. END_OF_DOCUMENT_TOKEN_TO_BE_REPLACED
Top PicksView