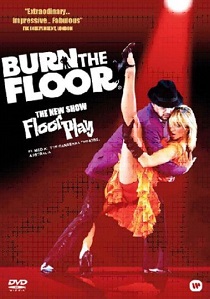 NewsSpecial InterestMusic
News Article Go back to homepage
Now's your chance to witness Ballroom and Latin dancing taken to the next level. Filmed at Australia's Canberra Theatre, Warner Music Entertainment introduces super hot Burn The Floor - FloorPlay out to own on DVD from 19th May 2008.
Jason Gilkison
Warner Music Entertainment
1 hour 24 minutes
19/05/2008
Thank you for supporting DVD365.net when you order using the link(s) below. As an Amazon Associate we earn from qualifying purchases
Buy DVD
Information

If you couldn't get enough of the Latino beats and body shimmying of TV favourites - Strictly Come Dancing, and So You Think You Can Dance, now's your chance to witness Ballroom and Latin dancing taken to the next level. Filmed at Australia's Canberra Theatre, Warner Music Entertainment introduces super hot Burn The Floor - FloorPlay out to own on DVD from 19th May 2008.

Combining passion and love of dance with aspects of modern theatre, this electrifying live show captures all the glamour and party atmosphere you'd expect from such a fusion of dance styles. Coinciding with the current tour which is taking the world by storm and the Blackpool Dance Festival (22nd - 29th May), FloorPlay is conceived, directed and choreographed by World Champion Ballroom dancer Jason Gilkison - the man behind the skilled choreography of the original 'Burn the Floor' which has now been seen by over a staggering 3 million people worldwide.

The original Burn the Floor concept emerged from a stunning display of Latin dancing at Elton John's 50th birthday party back in 1997. That show went on to successfully tour 15 countries. The new FloorPlay spectacular is an extension of the concept that is now appealing not just to the regular dance show fans but also to the devoted dance lovers who appreciate and recognise quality and expert dance routines and moves.

FloorPlay features a hand picked cast of talented, award winning dancers. The show itself oozes hot, steamy sex appeal with its set of 20 male and female dancers sauntering their way through waltzes, flinging and flaunting themselves to the Cha Cha Cha, Rumba and Samba, demanding their audiences to leave all perceptions of Ballroom Dancing at the front door!

This dazzling and action packed DVD features the new show, backstage tour, interviews with the dancers, and never before seen footage of the history of Burn the Floor on tour, giving viewers an insight into life backstage and on stage.

Out to own on DVD from 19th May from Warner Music Entertainment, watch Burn the Floor - FloorPlay, the dance extravaganza unfold before your very eyes and let you feet sing to the beats of this breathtaking, action-packed, sensual and ultimately inspiring an show stopping entertainment performance.