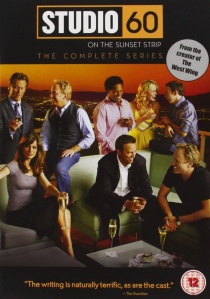 When the beleaguered executive producer of a long-running late-night sketch-comedy series interrupts the live broadcast and has a "Network" moment on the air, the industry, the media and the viewers are galvanized. Into this melee steps shrewd and self-confident network entertainment chief Jordan McDeere, who squares off against the chairman and rehires a brilliant but unpredictable writer/producer team - which had left the show years ago under a cloud of controversy - to bring the show back from the brink.

This provocative, highly anticipated comedic drama literally goes behind the scenes to expose the politics, personalities and pandemonium of producing a flagship series on a major television network.

As well as all twenty two episodes, the Studio 60 On The Sunset Strip DVD includes these insightful special features: