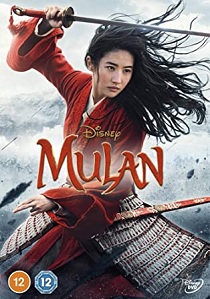 When the Emperor of China issues a decree that one man per family must serve in the Imperial Army to defend the country from Northern invaders, Hua Mulan, the eldest daughter of an honored warrior, steps in to take the place of her ailing father.

Masquerading as a man, Hua Jun, she is tested every step of the way and must harness her inner-strength and embrace her true potential. It is an epic journey that will transform her into an honored warrior and earn her the respect of a grateful nation... and a proud father.

Mulan features a celebrated international cast led by Liu Yifei (The Forbidden Kingdom, Once Upon a Time) was cast as Hua Mulan following a year-long global casting search. Joining her are Donnie Yen (Rogue One: A Star Wars Story) as Commander Tung; Jason Scott Lee (Crouching Tiger, Hidden Dragon: Sword of Destiny) as Böri Khan; Yoson An (The Meg) as Cheng Honghui; with Gong Li (Memoirs of a Geisha, Raise the Red Lantern) as Xianniang and Jet Li (Shaolin Temple, Lethal Weapon 4) as the Emperor.

The film is directed by Niki Caro from a screenplay by Rick Jaffa & Amanda Silver and Elizabeth Martin & Lauren Hynek based on the narrative poem The Ballad of Mulan.

DVD
After more than thirty years of service as one of the Navy's top aviators, Pete 'Maverick' Mitchell is back where he belongs as Top Gun: Maverick flies onto DVD, Blu-ray and 4K UHD 31st October 2022 from Paramount Home ... END_OF_DOCUMENT_TOKEN_TO_BE_REPLACED
Top PicksView