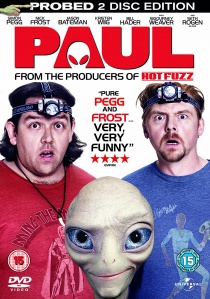 From the team that bought you Hot Fuzz and Shaun of the Dead comes an out-of-this-world gift for Father's Day and the must-own comedy adventure of the year... Paul.

For the past 60 years, an alien named Paul (voiced by Seth Rogen; Superbad, Knocked Up) has been hanging out at a top-secret military base. When he discovers he's been taken prisoner, the quick-witted, smart-ass alien decides to escape the compound and hop on the first vehicle out of town-a rented RV containing Earthlings Graeme Willy (Pegg) and Clive Gollings (Frost) who are on a pilgrimage to America's UFO heartland.

Chased by federal agents and the fanatical father of a young woman that they accidentally kidnap, Graeme and Clive hatch a fumbling escape plan to return Paul to his mother ship. As the two nerds struggle to help, one little green man might just take his fellow outcasts from misfits to intergalactic heroes.

Co-written by Pegg and Frost, and directed by Greg Mottola (Superbad), Paul features a fantastic supporting cast of Hollywood actors including Jason Bateman (Up in the Air, Juno), Bill Hader (Forgetting Sarah Marshall, Superbad) and Kristian Wiig (Despicable Me, Knocked Up). Packed with brilliant special features, Paul is the perfect comedy to share with your dad this Father's Day on DVD and Blu-ray Triple Play!

DVD
In Brian And Charles, released on DVD and Blu-ray 10th October 2022 from Mediumrare, an inventor lives alone in a remote village in the countryside, inventing useless things out of found objects in his garage. That is until ... END_OF_DOCUMENT_TOKEN_TO_BE_REPLACED
Top PicksView