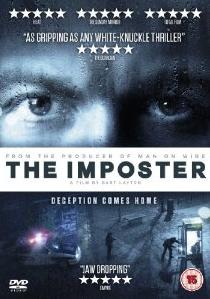 Be the first to witness the most unbelievable true story in the highly anticipated box office smash, The Imposter. As well as being shortlisted for an Oscar nomination, this critically-acclaimed and award-winning documentary thriller is out on DVD, Blu-ray, Download and On-Demand on 7th January 2013 from Picturehouse Entertainment and Revolver and will leave you wondering if the truth really is stranger than fiction.

In 1994, 13-year-old Nicholas Barclay disappeared from his home in San Antonio, Texas. Three and a half years later, he was found alive, thousands of miles away in Spain. Disorientated and quivering with fear, he divulges his shocking story of kidnap and torture. His family is overjoyed to bring him home, but all is not what it seems.

Despite having the same tattoos, he looks decidedly different and now speaks with a strange French accent. It's only when a private investigator starts asking questions that this astonishing true story takes an even stranger turn.

Directed by Bart Layton, this bold and utterly unmissable true crime story is one of the most talked about films of the year. Intriguing and gripping in equal measures, Layton combines both documentary and stylised visualisations to unveil the jaw-dropping true story of Nicholas Barclay's disappearance. As the truth begins to dawn on you, another emerges leaving you even further on edge as deception comes home...

The film creates a wonderful cohesion between real interview footage and filmed re-enactments, making The Imposter a thriller filled with twists that you don't see coming - it's about the lies that we tell ourselves to find the truth.