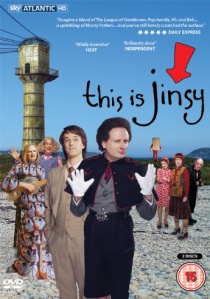 Fresh from its first full transmission on Sky Atlantic, This Is Jinsy, will be released on DVD on 7th November 2011 from 2entertain. From newcomers Chris Bran and Justin Chubb, This Is Jinsy is a truly original new comedy about the eccentric residents of the fictional island of Jinsy. Featuring a who's who of comic guest stars, from David Tennant and Harry Hill to Jennifer Saunders and Catherine Tate, the eight-part series is stuffed full of off-kilter charm.

Packed with surreal sketches and infectiously catchy songs, each episode follows the adventures of the island's pompous arbiter Maven (Chubb) and his beleaguered assistant Sporall (Bran) as they enforce the wishes of The Great He (Jinsy Praise Him!) and find themselves in deep water at every turn.

Based in the Great Tower in the parish of Veen, Maven and Sporall keep a close eye on the residents of Jinsy - all 791 of them. Life on the island, you see, is rather Orwellian: each colourful member of the community, from local folk dribbler Melody Lane to weather monk Tracee Henge, is monitored by a surveillance system of tessellators.

BD
Finding praise from critics around the world, Boyhood, following the life of Mason, from early childhood to his arrival at college, is released on Blu-ray and 4K UHD 27th March 2023 from Arrow Films. END_OF_DOCUMENT_TOKEN_TO_BE_REPLACED
Top PicksView