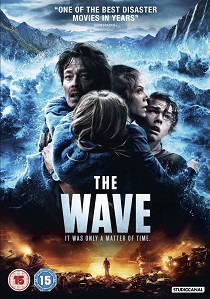 In 1905, a tsunami devastates a small mountain town. Scientists know it will happen again. It's only a matter of when.

As one man prepares to move from his hometown with his family, his worst nightmare is about to come true. The siren goes off and the disaster is inevitable. With less than 10 minutes to react, it becomes a race against time in order to save as many as possible including his own family.

A hit at the 2016 Glasgow FrightFest, The Wave, released on DVD and Blu-ray by StudioCanal on 15th August 2016, is one of the most impressive and heart-stopping disaster films in years, with spectacular action sequences that grip you from start to finish.

While so many disaster films claim to be inspired by reality, The Wave actually is since geologists agree that the Åkneset mountain pass one day will fall out and cause a town-destroying tsunami. The feeling that this actually could happen is unshakeable throughout the film, keeping you right on your toes.

Director Roar Uthaug - recently tasked with helming the reboot of the Tomb Raider franchise, starring Oscar-winner Alicia Vikander - had already shown us he could handle nail-biting tension with the acclaimed Cold Prey, and now gets to show off his action chops. He deftly switches between family drama, action-packed scenes of destruction and the riveting rescue mission without missing a beat and spends time getting you invested in the characters of Kristian, Idun - fantastic performances from Kristoffer Joner and Ane Dahl Torp - and their kids so that when the wave hits, you really care what happens to them.

Combined with brilliant performances and stunning cinematography, The Wave is up there in the best tradition of summer blockbusters and natural disaster movies such as The Impossible.