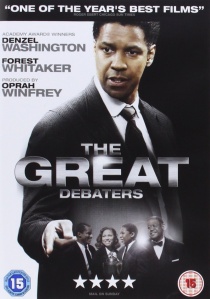 A-list Academy Award winners Denzel Washington (Unstoppable; The Book Of Eli) and Forest Whitaker (The Last King Of Scotland; Repo Men) star in the gripping Golden Globe nominated drama The Great Debaters which is released by High Fliers on retail DVD on 22nd August 2011. The film, which Washington also directed, was inspired by the true story of a temperamental debating coach who moulded the students of a small Texas college into one of the US's most formidable debating teams.

Washington plays the role of ambitious coach Professor Melvin Tolson while Forest Whitaker plays Dr James Farmer Snr, the resentful father of a student whose loyalties now lie almost exclusively with his coach. Tolson, an outspoken Wiley College professor, recognises the remarkable power of knowledge and can see how his young debating students possess the spark of a new generation. Convinced that they could invoke great change if given the necessary confidence and tools, he implores them to take responsibility for their future while at the same time furtively attempting to protect them from his clandestine role as an organiser for the Southern Tenant Farmers Union.

One of Tolson's most promising students is the 14-year-old prodigy James Farmer Jr. whose father is a renowned scholar and a major influence in the emerging student's life. However, James Snr. has yet to learn how to truly harness the power of knowledge through action and assertion but his son has seen the appalling effects of racism all around him and longs to live in a world where nobody is in fear simply because of the colour of their skin. Tolson coaches his team to a virtually undefeated season that includes the first debate in the US between white and black students and which ends with an invitation to challenge Harvard University's national champions.

The team must rise to the Harvard challenge but are forced to play out the contest in front of a national radio audience and against the backdrop of a racist lynch mob, violent clashes with the police and a near riot.