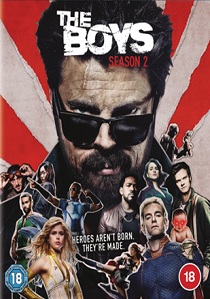 Based on the gripping comic book created by Garth Ennis (Preacher) and Darick Robertson (Transmetropolitan), The Boys follows a group of vigilantes known informally as "The Boys", who make it their mission to take down corrupt superheroes "The Seven" with no more than their blue-collar grit and a willingness to fight dirty.

But in a world where superheroes abuse their celebrity for personal gain and are marketed and monetised by the powerful Vought Corporation, it's the powerless against the super powerful as The Boys embark on a heroic quest to bring down the system.

In a more intense Season 2 of The Boys, Butcher, Hughie and the team reel from their losses in Season 1. On the run from the law, they struggle to fight back against the Superheroes. Meanwhile Vought, the hero management company, cashes in on the panic over Supervillains, and a new hero, Stormfront, shakes up the company and challenges an already unstable Homelander.

HotDVDBD
From the producers of Nobody and John Wick comes a bare-knuckle, coal-dark holiday action-comedy that says you should always bet on red as Violent Night sledges in on DVD and Blu-ray 6th March 2023 from Warner Home Video. END_OF_DOCUMENT_TOKEN_TO_BE_REPLACED
Top PicksView