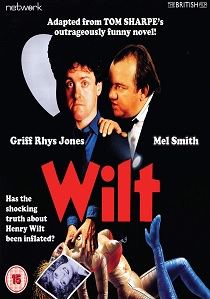 Henry Wilt spends his evenings walking his dog and fantasising about murdering his domineering wife, Eva. Whilst incredibly drunk at a party, Wilt's entanglement with a life-size inflatable doll ends with him dumping it in a convenient hole at a building site. The following morning, when Eva cannot be found, Wilt's activities attract the suspicion of the dogged Inspector Flint of Norwich CID, who firmly believes that Mrs Wilt is now pushing up twenty tons of pre-mixed concrete...

Griff Rhys Jones and Mel Smith star as the hapless Wilt and his single-minded pursuer in this classic comedy film, adapted from Tom Sharpe's outrageously funny novel by Andrew Marshall and David Renwick.

DVD
In Your Honor, released on DVD 31st May 2021 from Paramount Home Entertainment, Bryan Cranston stars as a New Orleans judge who is forced to confront his own deepest convictions when his son is ... END_OF_DOCUMENT_TOKEN_TO_BE_REPLACED
Top PicksView