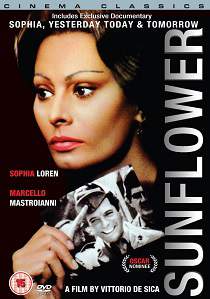 Oscar-winning screen siren Sophia Loren's classic Sunflower finally gets the release it deserves as it arrives on DVD and VOD on 26th January 2015, in a stunningly re-mastered version, presented in its original widescreen format courtesy of Argent Films.

Loren (Two Women, A Special Day) and award-winning leading man Marcello Mastroianni (Dolce Vita, 8½) are newlywed lovers torn apart by war, despite almost impossible odds they never give up on one another. Originally released in 1970, the film comes to DVD in a newly restored version, taken from HD elements, befitting its sumptuous photography (by Giuseppe Rotunno, who lit most Italian headliners including The Leopard, he was Fellini's cinematographer and received an Oscar nomination for All That Jazz), and production values.

Sunflower is presented for the first time in its entirety featuring eight minutes of previously unseen scenes and comes complete with an exclusive documentary Sophia, Yesterday Today Tomorrow, woven around an intimate interview with Loren. The DVD comes with alternative language options: the English language version and optional Italian audio with new improved, switchable, English subtitles.

HotUHD
After moving to a new town, two brothers discover that the area is a haven for vampires as the classic The Lost Boys is released on 4K UHD 20th September 2022 from Warner Home Video. END_OF_DOCUMENT_TOKEN_TO_BE_REPLACED
Top PicksView