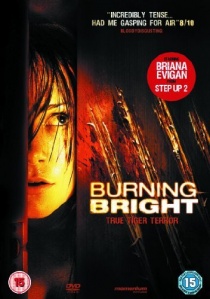 From the studio that had terrified you with Stephen King's The Mist and Teeth comes the new edgeof-your-seat thriller Burning Bright, released on DVD by Momentum Pictures Home Entertainment on 6th September 2010. Trapped in a house with a ravenous tiger during a hurricane,a young woman must decide whether or not to sacrifice her younger brother to save her own skin.

When 20 year old Kelly (Briana Evigan) wakes late at night during a hurricane, she finds a hungry tiger stalking her through her home. With every door and window boarded up from the outside and her stepfather nowhere to be found, Kelly fights frantically to stay one step ahead of the killer beast.

Torn between protecting her autistic brother Tom and saving herself from a brutal mauling, Kelly's situation becomes more complicated and desperate at every terrifying turn.

Briana Evigan, the stunning star of Step up 2: The Streets and Sorority Row, leads a strong young cast supported by newcomer Charlie Tahan as her vulnerable disabled brother and Garret Dillahunt (No Country for Old Men) as her step-father. Burning Bright also boasts a star turn from hell-raising rocker Meat Loaf as the trader who finds a home for the savage Bengali tiger.

The footage of the tiger was shot within the house; no animatronics, no tricks - this tiger is very real and very hungry.

A roaring and engaging ride with a unique concept and suspenseful plot, Burning Bright is this year's adrenalin-pumped thriller that is sure to keep you on the edge of your seat till its bloody finale.

UHD
A 13-year-old girl named Meilin turns into a giant red panda whenever she gets too excited in Disney and Pixar's 25th feature film Turning Red, released on DVD, Blu-ray and 4K UHD 2nd May 2022 from Walt Disney Home ... END_OF_DOCUMENT_TOKEN_TO_BE_REPLACED
Top PicksView