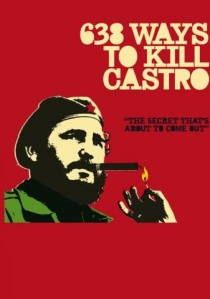 More evidence, if it were needed, that truth is very often stranger than fiction, director Dollan Cannell's extraordinary film, 638 Ways To Kill Castro, documents some of the increasingly desperate, spectacular and frankly bizarre ways that the CIA, various disgruntled Cuban exiles and alleged terrorists have been trying to find to assassinate the seemingly indestructible Cuban leader.

The staggeringly high number of plots to dispatch Castro was calculated by Fabian Escalante, the former head of Cuban Intelligence and the man responsible for protecting Castro for the best part of 50 years. Through candid interviews with the likes of former US President Jimmy Carter, alleged terrorists Orlando Bosch and Luis Posada Carriles, controversially outspoken US Congresswoman Ileana Ros-Lehtinen and ex-CIA agent Tom Parrott, amongst others, interspersed with archive footage of Castro himself, 638 Ways To Kill Castro tells a story packed with the kind of intrigue, gadgets and foul play more likely to be found in a James Bond escapade.

Amidst the hilarity and absurdity of the recounting of numerous failed conspiracies and attempts on Castro's life, though, lies a more serious, revealing and topical commentary on political hypocrisy and the current US "War on Terror" that unsurprisingly involves appearances by notable members of a certain US political dynasty. Amusing, entertaining and insightful, 638 Ways To Kill Castro is a thought-provoking film certain to appeal to fans of the works of Michael Moore (Fahrenheit 9/11; Bowling For Columbine) and Nick Broomfield (Tracking Down Maggie; The Leader, His Driver And The Driver's Wife).