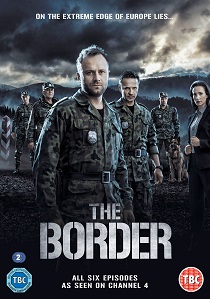 Nordic Noir & Beyond is pleased to announce the DVD release of the complete first season of the gripping and boundary pushing crime drama The Border on 5th September 2016. The timely series is the first Polish drama to have been aired on UK TV screens on Channel 4 and All 4.

The six part series is set in the isolated but beautiful Bieszczady Mountains at the extreme Polish-Ukrainian border. Captain Rebrow's unit, which is specialised in human-trafficking, becomes the target of a disastrous bomb attack leaving only Rebrow as the sole survivor.

Not long after the attack Reborw becomes the main suspect in the bombing. Determined to prove his innocence and to get justice for his friends and girlfriend, Rebrow embarks on a dangerous investigation uncovering a dark political conspiracy.

The original Polish title is "Wataha", which literal translation is "the pack" or "wolf pack". However, the English title "The Border" is just as fitting. There are many references in the gripping series to not just the geographical border between Poland and Ukraine, but also to the border between life and death, the affluent and the underprivileged world as well as ethical borders.

DVD
Tender and violent, terrifying and comic, The English, released on DVD 19th December 2022 from Dazzler Media., takes the arrows and bullets of its genre only to twist them into a uniquely compelling parable on gender, race, ... END_OF_DOCUMENT_TOKEN_TO_BE_REPLACED
Top PicksView