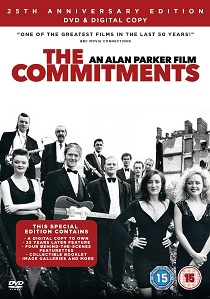 25 years ago, on the big screen, wannabe band manager Jimmy Rabbitte put this advert in the local newspaper and before long a loveable ragtag group of Dubliners got together to form the soulful sounds of The Commitments.

Renowned director Alan Parker's (Midnight Express, Bugsey Malone), funny, uplifting, gritty film, based on Roddy Doyle's (The Snapper, The Van, debut novel, took the world by storm on its 1991 release, garnering critical acclaim and awards galore including a BAFTA for Best Film. It has since spawned a slew of touring bands and a hugely successful stage musical which commences its next UK tour later this year.

To celebrate the 25th Anniversary of this seminal film, RLJ Entertainment is thrilled to release The Commitments Special Edition, featuring a host of bonus features, including brand new interviews with Alan Parker and cast members and much much more. It will be released in both Blu-ray and DVD formats, with a digital copy to download, watch and own, and a collectible booklet, on 19th September 2016.

Jimmy Rabbitte (Robert Arkins) knows he's the world's greatest band manager... now he just needs a band. Auditioning anyone and everyone he can find from the rough streets of Dublin, he eventually gathers the ten most talented, but least experienced musicians with the aim to launch the greatest Irish Soul band of all time.

Featuring a cast of virtually unknown actors at the time, Alan Parker based his casting on musical ability as well as acting and this is reflected in the spectacular performances from The Commitments with their stunning renditions of Soul greats, creating an astounding, unforgettable soundtrack.