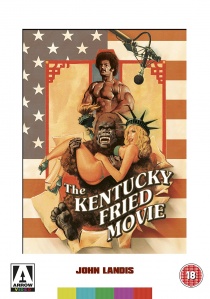 From the team that brought you Airplane, Police Squad and The Naked Gun comes the original pioneering laughter-fest that spawned countless comedy quotes, launched the careers of some of the funniest men in Hollywood and became the absolute must-see cult movie of its time. Now, the phenomenon that is The Kentucky Fried Movie is back, this time as a special two-disc DVD release featuring a host of extras, including a feature-length interview with its co-creators, the Zucker brothers, plus brand new artwork by artist Graham Humphreys (The Evil Dead; A Nightmare On Elm Street).

Written by Jim Abrahams and David and Jerry Zucker, and directed by John Landis (An American Werewolf In London; The Blues Brothers; Animal House), The Kentucky Fried Movie is a hilarious, non-stop, adults-only send up of everything from TV, advertising and current affairs to exploitation movies and sex. Regarded by the LA Times as "inspired... flawless... [and] very raunchy", this cavalcade of puns, double entendres, slapstick and satire set the benchmark for every bad taste, gross-out, screwball comedy movie that would follow in its infamous footsteps.

Among the film's many unforgettable highlights are the gratuitously sex-filled teaser for the teen exploitation romp Catholic High School Girls In Trouble, the scene stealing boom microphone in the chat show High Adventure, the genius word-play of Courtroom and the awe-inspiring kung fu mini-movie, A Fistful Of Yen.

DVD
The end of the line is only the beginning in a wild, non-stop thrill ride through modern-day Japan as Bullet Train is released on DVD, Blu-ray and 4K UHD 24th October 2022 from Sony Pictures Home Entertainment END_OF_DOCUMENT_TOKEN_TO_BE_REPLACED
Top PicksView