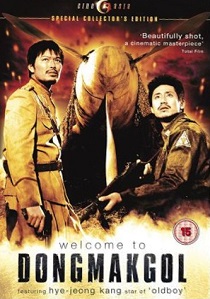 Based on the popular play by Korean screenwriter-director Jang Jin (Murder, Take One; Someone Special) and directed by newcomer Park Kwang-hun, Welcome To Dongmakgol, released on DVD (£16.99) by Cine-Asia on 26th February 2007, is a heartwarming and fantastical comedy set during the Korean War and starring Shin Ha-kyun (Sympathy For Lady Vengeance), Jeong Jae-yeong (Sympathy For Mr. Vengeance) and Kang Hye-jeong (Oldboy).

In the midst of the Korean War, following the landing of US forces at Incheon, a small troop of Communist soldiers is ambushed and massacred by a military unit from the South. Three survivors of the attack manage to escape and flee north where they meet a crazy young woman, Yeo-il, who leads them to a tiny and remote village called Dongmakgol. However, the village is also a temporary refuge to several other visitors - two Southern soldiers, plus a US Navy pilot whose plane has crashlanded nearby.

In no time at all the civil conflict is brought to the peaceful village in the form of a futile Mexican standoff that ends with the village's food store being destroyed. A temporary truce is called as the opposing forces reluctantly agree to work together to rebuild and restock the store. But as the soldiers begin to settle into the daily life of the village, their peaceful idyll comes under threat from the most unexpected quarters...

At times shockingly brutal, at others otherworldly beautiful and funny, Welcome To Dongmakgol boasts an irresistible combination of well-defined and likeable characters, visual splendour, magical realism and a nostalgic yearning for the simple joys in life.

Adding to the film's many pleasures are exceptional special effects sequences and a beautifully emotive musical score by award winning composer Joe Hisaishi (Howl's Moving Castle; Spirited Away; Princess Mononoke). A charming film full of genuine warmth, Welcome To Dongmakgol casts a spell that only the harshest and most cynical of audiences could possibly resist.

BD
Based on the global blockbuster videogame franchise from Sega, Sonic The Hedgehog, released on DVD, Blu-ray and 4K UHD from 8th June 2020 from Paramount Home Entertainment, tells the story of the ... END_OF_DOCUMENT_TOKEN_TO_BE_REPLACED
Hot PicksView

UHD
27/09/2020
Now including the Black and White version of the film, Parasite is released on 4K UHD 23rd November 2020 from Curzon Artificial Eye