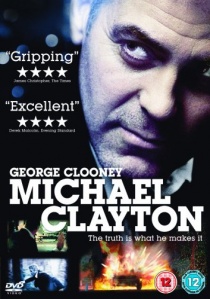 Michael Clayton (Clooney; Ocean's Thirteen, Good Night, and Good Luck, Syriana) is an in-house 'fixer' at one of the largest corporate law firms in New York. At the behest of the firm's co-founder Marty Bach (Pollack; Eyes Wide Shut, Cold Mountain, Tootsie), Clayton takes care of Kenner, Bach & Ledeen's dirtiest work. Clayton cleans up clients' messes, handling anything from hit-and-runs and damaging stories in the press to shoplifting wives and crooked politicians. Though burned out and discontented in his job, Clayton is inextricably tied to Kenner, Bach & Ledeen; divorce, a crippling gambling habit and a failed business venture have left him with mounting debt.

At the agrichemical company U/North, the career of in-house counsel chief Karen Crowder (Swinton; The Deep End, The Chronicles of Narnia, Young Adam) rests on the multi-million dollar settlement of a class action suit that Clayton's firm is leading to a seemingly successful conclusion. When Kenner, Bach & Ledeen's top litigator, the brilliant Arthur Edens (Wilkinson; In The Bedroom, Girl With A Pearl Earring, Eternal Sunshine of the Spotless Mind), has an apparent breakdown and subsequently tries to sabotage the entire U/North case, Michael Clayton is sent to tackle this unprecedented disaster and in doing so comes face-to-face with the reality of who he has become...

Michael Clayton on DVD includes explosive special features including deleted scenes and an audio commentary by director Tony Gilroy and editor John Gilroy. Don't miss out on your chance to see this exhilarating rollercoaster ride on DVD this February.