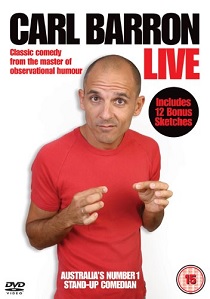 One of Australia's most loved stand-up comedians comes to the UK this May. Coinciding with his run at The Riverside Studios in London, Carl Barron Live - Australia's biggest selling stand-up comedy DVD - is released on DVD on 23rd May 2011 from 2entertain.

He's a legend in Australia, where his last DVD outsold Robin Williams and Eddie Murphy combined. He has featured twice at the Montreal Just for Laughs Festival - and headlined the Just for Laughs National Tour. Hailing from the outback in Australia, growing up the son of a sheep shearer, he moved to the city, walked on stage at a comedy club one night and told the audience how a bird had pooed on him on the way to the show and the rest is history!

Filmed in his native Australia, this 70 minute live performance perfectly captures Carl's gentle, self-conscious and relaxed approach to comedy. He manages to turn everyday absurdities into knee-thumping hilarity, and he's got the worldwide fan-base to prove it. With his observational style of comedy he has the audience in stitches from the moment he walks on stage and says... "How's it goin?".