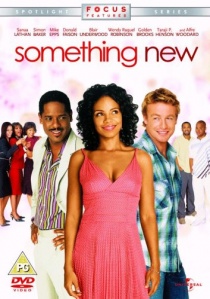 Expect the unexpected when the sparkling romantic comedy Something New, the critically acclaimed film about a woman who knows where she's headed in business but has lost her way in affairs of the heart, arrives on DVD and to 'download to own' from 12th March 2007, courtesy of Universal Pictures International Entertainment.

Something New is a tale that looks at what happens when two worlds collide. Kenya Denise McQueen (Sanaa Lathan) appears to have it all - beauty, brains and a prestigious job at a top accounting firm. She also knows exactly what she wants in a man, but she's not having much luck finding someone who fits the bill. Her life has become all work and no play and after another Valentine's Day spent working late and urged on by her friends to try something new and let go of her dream of the "ideal man", she accepts a blind date with a sexy architectural landscaper named Brian (Simon Baker), only to cut the date short upon first sight. Brian isn't exactly what she pictured for herself ... he's white.

While not the man she had in mind for romance, Kenya hires him to landscape her new home and finds herself irresistibly drawn to his earthy, laid-back charm. When she finally meets her theoretically perfect match, corporate attorney Mark (Blair Underwood), Kenya is further thrown into confusion. Everybody has an opinion, from her trio of girlfriends Cheryl, Suzzette, and Nedra (Wendy Raquel Robinson, Golden Brooks, Taraji P. Henson) to her socially prominent parents Joyce and Edmond (Alfre Woodard and Earl Billings).

Ultimately, Kenya must decide between the relationship everyone expects and the romance no one expected.