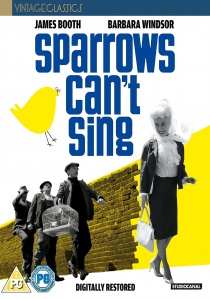 Joan Littlewood's cracking Cockney comedy drama Sparrows Can't Sing is a sixties gem starring Barbara Windsor, Bafta nominated for her lead role, and a host of now familiar faces making their screen debuts, in a film that would pave the way for the realist, semi-improvised work of the likes of Mike Leigh and Ken Loach. Giving us a glimpse of a long gone London, it also features cameo appearances by legendary London gangsters The Krays.

Based on a play by Stephen Lewis, who would go on to star as Blakey in sitcom On the Buses, Sparrows Can't Sing is the story of Charlie, a rough, tough sailor who returns home to his East End of London stamping ground to discover his home had been bulldozed, and his wife Maggie has moved into a new tower block with Bert the bus driver, and they've had a kid together. Charlie's not the sort to take things lying down - and despite this unpromising homecoming he'll do anything to try and win Maggie back - and that means anything!

Director Joan Littlewood, a driving force in British theatre, rounded up the cream of the crop of Brit acting talent for this, her only film. Barbara Windsor, who was given her theatre acting break by Littlewood, was something of a sensation as Maggie, in her first lead role, earning a nomination for Best British Actress at the Baftas. She'd go on to star in her first Carry On film only a year later, and returned to the East End as landlady Peggy Mitchell thirty years later in Eastenders.

Also appearing is unforgettable character actor Murray Melvin, whose credits include Ken Russell's The Devils, Stanley Kubrick's Barry Lyndon, Brit classic A Taste Of Honey, as well as the British crime films Let Him Have It and The Krays.

The brilliant James Booth, who plays the put upon Charlie, went on to have a sterling cinema career, appearing in Robbery with Stanley Baker, Zulu with Michael Caine, and cult thriller Revenge with Joan Collins. He is arguably best remembered as cowardly ex-convict Ernie Miles in David Lynch's Twin Peaks TV series.

Look out for much-loved TV comic Arthur Mullard; Harry H Corbett, who would find fame as the long-suffering Harold in STEPTOE AND SON; and the prolific and much-missed Roy Kinnear, here performing a memorable piece of slapstick with a ladder.

Sparrows Can't Sing is part of the Vintage Classics Collection - some of the most iconic films in British cinema history, digitally restored on DVD and Blu-ray, featuring brand new bonus material.

Sparrows Can't Sing is part of the BFI's Britain on Film project, in which 1000's of titles will be digitised and made available online via BFI Player, as well as this physical release. Britain on Film was launched on July 7th. The Digital Film restoration was funded by StudioCanal in collaboration with the BFI's Unlocking Film Heritage programme (awarding funds from the National Lottery).