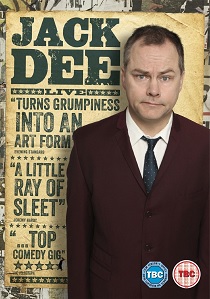 The UK's favourite grumpy comedian is back! Jack Dee makes a long overdue and very welcome return to stand-up comedy, as he releases his highly anticipated new live comedy DVD, Jack Dee So What? Live. Set for release on DVD and Blu-Ray from 18th November 2013, from Universal Pictures (UK), So What? Is Jack's first DVD release in eight years. This rare release from Jack is the only place fans can experience his latest new material and experience firsthand the original Glum Meister at his most miserable best.

Filmed at London's Hammersmith Apollo, Jack once again brings his legendary sarcastic, witty, deadpan humour to the stage. Relatable to both his longstanding fans, younger fans and family's alike, Jack has become a parenting guru over the years offering hints and tips on how to deal with hormonal and stroppy teenagers as, in his own words, they become "mentally ill". Comedy's new super nanny talks you through how to cope with endless hours of online gaming and even dealing with arson at a music festival!. Combine dealing with electricians and trips to the supermarket 'Jack Dee So What? Live' truly is the new handbook to life's annoyances and misdemeanours.

After a six-year absence from live comedy tours, Jack Dee has been touring the UK and Ireland to sell-out theatres for the past 18 months. The host of the long running Radio 4 show I'm Sorry I haven't A Clue said he was returning to the road 'as he wanted to spend less time with his family'.

So.... where's he been? Appearing on shows like QI and Shooting Stars, Never Mind The Buzzcocks, 8 out of 10 Cats and Have I Got News For You. He's been hosting Radio 4's legendary I'm Sorry I Haven't A Clue, recently hosted Sky Atlantic's new show Don't Sit In The Front Row, co-writing and starring in four series of BBC 2's hit sitcom Lead Balloon and writing his memoirs, Thanks For Nothing which he modestly dedicated to himself - "Without whom none of this would have been possible".

DVD
After more than thirty years of service as one of the Navy's top aviators, Pete 'Maverick' Mitchell is back where he belongs as Top Gun: Maverick flies onto DVD, Blu-ray and 4K UHD 31st October 2022 from Paramount Home ... END_OF_DOCUMENT_TOKEN_TO_BE_REPLACED
Top PicksView