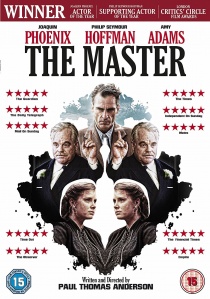 NewsDrama
News Article Go back to homepage
The Master, released on DVD and Blu-ray by Entertainment in Video on 11th March 2013, is the 1950s-set drama about a US Navy veteran suffering from post-traumatic stress disorder who seeks salvation in the company of a charismatic cult leader known as "The Master".
Matt Hering, Bruce Goodchild, Sarah Shoshana David, Mike Howard, Price Carson, Joaquin Phoenix
Paul Thomas Anderson
Daniel Lupi, Megan Ellison, Albert Chi, Paul Thomas Anderson
Entertainment in Video
2 hours 18 minutes
11/03/2013
Thank you for supporting DVD365.net when you order using the link(s) below. As an Amazon Associate we earn from qualifying purchases
Buy DVD
Buy BD
Information

Paul Thomas Anderson (There Will Be Blood) writes and directs the Academy Award-nominated drama The Master, released on DVD and Blu-ray by Entertainment in Video on 11th March 2013, the 1950s-set drama about a US Navy veteran suffering from post-traumatic stress disorder who seeks salvation in the company of a charismatic cult leader known as "The Master" (Philip Seymour Hoffman, Moneyball). Joaquin Phoenix (Gladiator) stars as Freddie Quell, a troubled drifter who arrives home to post-WWII America shaken, disillusioned and fearful of the future.

A raging alcoholic, Quell cannot begin to make sense of his deeply-rooted inner torment, let alone surmount it. When he meets Lancaster Dodd (Philip Seymour Hoffman), the 'master' of a cult called The Cause, an intense and ambiguous relationship develops between the two men. But do Dodd's teachings hold the power to turn Quell's life around?

Awarded Best Actor for both Philip Seymour Hoffman and Joaquin Phoenix and Best Director for Paul Thomas Anderson at the 2012 Venice Film Festival, The Master is a film "that casts a spell like a fever dream (David Ansen, Newsweek)".

Stunningly photographed in 65mm, The Master stands as an undeniable cinematic experience. Will Freddie be able to outrun his past? Will The Cause help or hurt him? Can this tortured, violent creature be civilized? Or is man, after all, just a dirty animal?