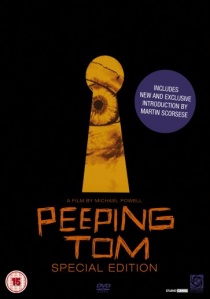 NewsHorrorThriller
News Article Go back to homepage
Out to own on DVD from Optimum Classics on 26th March 2007, from Michael Powell comes Peeping Tom : Special Edition, one of the most controversial films ever made in Britain, and a masterpiece of psychological terror.
Miles Malleson, Brenda Bruce, Maxine Audley, Anna Massey, Moira Shearer, Karlheinz Böhm
Michael Powell
Michael Powell, Albert Fennell
Optimum Classic
1 hour 41 minutes
26/03/2007
Thank you for supporting DVD365.net when you order using the link(s) below. As an Amazon Associate we earn from qualifying purchases
Buy DVD
Information

Out to own on DVD from Optimum Classics on 26th March 2007, from Michael Powell, the acclaimed director of A Matter Of Life And Death and The Red Shoes comes Peeping Tom : Special Edition, one of the most controversial films ever made in Britain, and a masterpiece of psychological terror.

By day, Mark Lewis (Carl Boehm) works as a modest focus-puller in a film studio. But he also shoots glamour photographs for a seedy Soho newsagent, and by night he seeks victims for his gruesome obsession with filming the face of mortal fear - the legacy of his father's sadistic experiments on him as a child.

Released in 1960, shortly before Hitchcock's equally shocking Psycho, the film was praised by the leading trade paper Kine Weekly as 'thoughtful' and 'at once tender as well as horrifying'. But it provoked British critics to a fury of disgust: 'the sickest and filthiest film I can remember seeing' (The Spectator); 'stinks more than anything else in British films' (New Statesman); 'Frankly beastly' (Financial Times); while Tribune wanted it 'flushed swiftly down the nearest sewer'.

Powell's career never recovered from the scandal. But twenty years later, Peeping Tom was hailed as a misunderstood masterpiece - especially by filmmakers such as Martin Scorsese and Bertrand Tavernier - and today its wit and beauty, as well as its insight into the voyeurism of cinema, have made it a modern classic