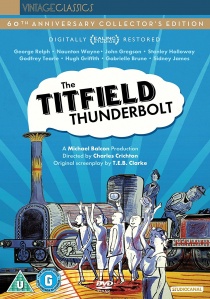 Released on DVD and Blu-Ray by StudioCanal on 14th January 2013, a comical and delightful tale of community spirit, written by celebrated Ealing regular and Academy Award Winner T.E.B. Clarke (The Lavender Hill Mob, Barnacle Bill), directed by Charles Crichton (A Fish Called Wanda, The Lavender Hill Mob) and celebrating its 60th Anniversary, The Titfield Thunderbolt - the first film to be shot in technicolor by the renowned studio - has been expertly digitally restored from the much loved, Golden Age of the Ealing Comedies.

Originally released in 1953, this charming classic follows the consequences of when the Government run, British Railways Service announce the closure of the line linking rural Titfield to Mallingford - the only line the Titfield inhabitants rely on to commute to work and transport their produce to market. A group of the local village residents make a bid to run it themselves, backed by a massively wealthy member of the community attracted to the complete lack of alcohol licensing hours on trains.

Unfortunately their decision puts them into direct competition with the local bus company and soon enough, a whole array of comically genius anarchy and madness ensues, including cunning sabotage and thrilling adventures.

UHD
Fast forward to the 1980s as Wonder Woman's next big screen adventure finds her facing a wide array of foes including Max Lord and The Cheetah as Wonder Woman 1984 flies in on Blu-ray and 4K UHD 22nd ... END_OF_DOCUMENT_TOKEN_TO_BE_REPLACED
Top PicksView