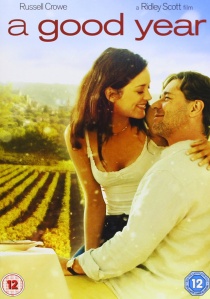 Sit down and savour the sumptuous treat that is A Good Year, released by Twentieth Century Fox Home Entertainment on DVD on 7th May 2007. Based on the best-selling book by the author of A Year in Provence, Peter Mayle and directed by and starring the Academy-Award winning team Ridley Scott and Russell Crowe, this DVD is a feast for all senses.

With a colourful supporting cast including a critically-acclaimed performance from Albert Finney (Big Fish), Freddie Highmore (Finding Neverland) and Tom Hollander (Pride and Prejudice) and set between the dramatic London city skyline and the beautiful scenery of provincial France; this witty and uplifting drama will bring the wonderful world of fine wines, romantic liaisons, luscious landscapes and long hazy summer evenings into homes.

Russell Crowe (Gladiator, A Beautiful Mind) stars as Max, a ruthlessly successful trader who, on inheriting a French vineyard from his eccentric Uncle (Finney), is taken on an unexpected journey from where he must choose whether to swap his lifestyle in the pursuit of happiness.

The A Good Year DVD is overflowing with special features to whet appetites, including Postcards From Provence - a unique behind the scenes feature length hybrid of video featurettes and audio commentary by director/producer Ridley Scott and screenwriter Mark Klein, a trailer featuring special filmed footage of Russell Crowe and Ridley Scott, as well as music videos - One Good Year, Weight Of Man and Testify by Russell Crowe's very own band - the Ordinary Fear Of God.

Encapsulating all that is popular and engaging about Peter Mayle's book, A Good Year taps into the modern-day obsession with dream homes and moving abroad. This is the perfect DVD for anyone who has ever fancied leaving it all behind and escaping into a world that many of us can only dream of.

Confident and cocky, Max Skinner is a successful and competitive London banker. His latest conquest has netted a tidy seven-figure profit, much to the chagrin of his rivals. Max's triumph is in perfect keeping with his philosophy: winning isn't everything, it's the only thing! Everything changes when Max receives sad news from France: his elderly Uncle Henry has passed away. Max, Henry's closest blood relative, is the sole beneficiary of his estate, which includes a Provençal chateau and vineyard, La Siroque. Max travels to the chateau where he spent his boyhood summers vacationing with his eccentric uncle, whom he hasn't seen or written to in years. While Max tends to the legal affairs of his inheritance, he is suspended from his firm, pending an investigation into his questionable bond transaction.

As Max fondly embraces the memories of summers past while contemplating a cloudy future, complications arise with the sudden arrival of a Napa Valley native, Christie Roberts who claims to be the illegitimate daughter of the deceased uncle, the discovery that the vineyard's plonk (as the French define bad wine) rivals the worst vinegar imaginable and Max's growing feelings towards the fetching local cafe owner, Fanny Chenal.

Max's memories and the passage of time bring forth emotions and feelings he thought were long lost, and afford him a new appreciation of his late Uncle Henry's philosophy on life - and on life in Provence: "There's nowhere else in the world where one can keep busy doing so little, yet enjoy it so much!" Does Max have what it takes to leave everything behind and live the dream?