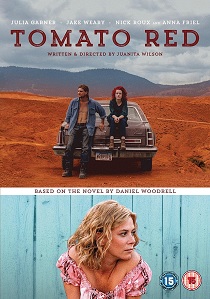 From Oscar® nominated director Juanita Wilson and based on the acclaimed novel by Daniel Woodrell (Winter's Bone), the acclaimed film Tomato Red is released on DVD 1st May 2017 from Element Pictures Distribution.

When small town drifter Sammy drives into town in search of his next cold beer and the bunch that'll have him, he gets a lot more than he bargained for. Food and lodging and the possibility of a better future thanks to redheaded Jamalee and her brother Jason who dream of hitting the big time. But breaks aren t easy to come by if you live in Venus Holler. Finding themselves powerless against the forces of corruption and prejudice, the hardest thing Sammy has to fight are the demons inside his own head.

Love, rage, redemption and revenge - Tomato Red is an original and moving film about the struggle to get a break and our deep seated need to belong.

Related Articles
Marcella: Series 2, Broken, I.T., Marcella, Good People, The Saboteurs, The Look of Love, Brookside's Most Memorable Moments, Without You, London Boulevard, Deep Water
The Perks of Being a Wallflower, Grandma, We Are What We Are, Martha Marcy May Marlene, The Assistant
Zombeavers, Altitude
Comments
DVD Releases News Pick

DVD
In Disney's Mulan, released on DVD, Blu-ray and 4K UHD 10th November 2020, a fearless young woman risks everything out of love for her family and her country to become one of the greatest warriors ... END_OF_DOCUMENT_TOKEN_TO_BE_REPLACED
Hot PicksView