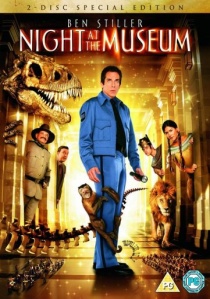 Experience a night of magical fun when the worldwide box-office hit Night At The Museum comes to life on DVD on }2nd April 2007/b} from Twentieth Century Fox Home Entertainment.

Night At The Museum -- starring Ben Stiller, Robin Williams and UK star talent Steve Coogan and Ricky Gervais -- is your ticket to enjoy the comedy and adventure that is unleashed between sundown and sunrise in the hallowed halls of the Natural History Museum and is the perfect Easter boredom buster this April. This museum tour of fun for the entire family continues with an impressive gallery of enjoyable DVD special features.

No museum night watchman can hold back the hilarious adventures that are set in motion when Rexy, the Tyrannosaurus Rex, and Dexter the monkey, along with a museum full of wild-eyed prehistoric creatures, fierce ancient warriors, long lost tribes, African mammals and history's legendary heroes come out to play. Their antics, first exhibited in the film, remain on display on the DVD along with a wide assortment of special features demonstrating how Night At The Museum came to life.

Larry Daley (Stiller, Madagascar, Starsky & Hutch), is a down and out dreamer who just can't seem to hold down a job. He has always believed he was destined for big things, but has no idea just how big a challenge he will face when he begrudgingly accepts a position as the new night guard at New York's Natural History Museum, taking over from the three elderly curators Cecil (Van Dyke), Gus (Mickey Rooney) and Reginald (Bill Cobbs).

On his very first night on the job, Larry is handed an over-sized flashlight and a dog-eared instruction manual, then left all alone in the eerily quiet, cavernous museum - but it won't be quiet for long! He is about to discover that when the visitors go home at the end of the day, the real adventure begins as the museums stuffed, waxed and well-preserved residents come out to play!