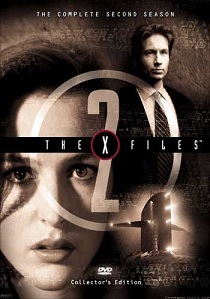 Fox "Spooky" Mulder works for a division of the FBI dealing with the paranormal and unexplained. He is a firm believer in existence of extra terrestrials, after his younger sister was apparently abducted by aliens when he was a boy, an event which remorselessly drives him on in his investigations which will investigate much deeper in season two.

Dana Scully is a serious-minded, and sceptical, medical scientist who has been assigned to join Mulder on the X-Files in order to "de-bunk" his investigations and report her findings to a higher authority. However, she soon realises that everything she sees can't be explained away by science and she's about to have a close encounter she'd rather forget.

There are four episodes per disc, with disc seven containing the season finale as well as the extras, giving a running time of approximately 2 hours 56 minutes per disc. The episodes in the box-set are as follows:-

With the phenomenal success of the first season the increase in the budget both for the special effects and post-production is clearly visible. The picture quality is vastly improved on the first season which was only passable as VHS quality. However, what we have here is rather good for what is essentially still a television series. Naturally, with the X-files there are plenty of dark and gloomy scenes and although they do still suffer from a slight graininess, the colours are rich and vibrant with only minor occurrences of colour washout.

The sound is functional rather than exciting, although a pro-logic decoder will make a reasonable effort in attempting to give a more spooky ambience to the episodes. The dialogue is clear and precise and although not a patch on the bigger budget films it still manages to put in an adequate performance.

Similar to the season one box-set the extras are not really up to much with it all being still too American orientated. After the season two documentary all of the subsequent extras are just re-hashes of the same thing, even down to a poorly implemented Chris Carter commentary on some of the FX and deleted scenes. Even the television spots from the American Fox television channel get extremely annoying after a while. Let's just hope Fox can come up with something a little more original for the following seasons.

The seven discs are presented in a pleasant fold out box-set, although I suspect that the paper case spines could become damaged over time. The booklet is quite useful, with chapter listings for each episode, even if the subsequent episode listings of the other seasons are a little useless.

The second season is probably the best with some classic defining moments which made the X-files what it is today. Scully's abduction and a more active role of the "Cigarette Smoking Man" really set the ball rolling, although it is rapidly grinding to a halt as the X-files seems to be going a little stale in the latter series.

Even one of the discs has been rated as an 18, which unfortunately means the whole package has an 18 rating. I'm not sure which episode on the sixth disc caused the problem with the BBFC, but with episodes ranging from an extremely scary, and personal favourite, demon possession, killer plague or cannibalistic town you can take your pick!

Putting the criticism of the extras aside, this is still a superb package and a must purchase. The only trouble for X-files fans with a DVD player is that they've probably already purchased the videos or video season box-sets. Mind you, for those of us who haven't it is still worth the expense, although it will be an expensive, but worthy, collection.