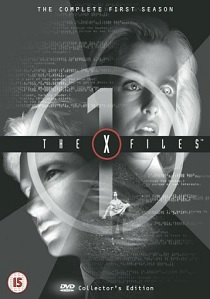 Fox "Spooky" Mulder works for a division of the FBI dealing with the paranormal and unexplained. He is a firm believer in existence of extra terrestrials, after his younger sister was apparently abducted by aliens when he was a boy, an event which remorselessly drives him on in his investigations. Dana Scully is a serious-minded, and sceptical, medical scientist who has been assigned to join Mulder on the X-Files in order to "de-bunk" his investigations and report her findings to a higher authority. However, she soon realises that everything she sees can't be explained away by science.

There is not much else I can say about the details on the programme content. Unless you've been on another planet for the past six years you should know all about this television phenomenon (and if you don't you'd better give Fox a call!). Out of all of the seasons, the first is still my favourite. It contains all of the best sci-fi and horror episodes without having to resort to fancy special effects (it's amazing how cheap a bright light in the sky can be!) and Scully is still the sceptical type.

The stories are well written and the drama intense at times with the episode 'Ice', although a blatant rip-off of the film 'The Thing', being both scary and gripping throughout. If you compare the season one episodes against the later seasons you'll see how far the X-files has gone down hill. The ridiculous comedy episodes and continuing government conspiracies become a little tiresome.

There are four episodes per disc, giving a running time of approximately 2 hours 56 minutes per disc. The episodes in the box-set are as follows:-

With the material being created for television broadcast the picture and sound are hardly going to give your surround system a workout. The picture has an average bit-rate which is certainly brighter and clearer than the video, and without the picture noise. The sound is only presented in humble stereo but your surround decoder should be able to make something from it. At least the later seasons will be in surround.

The extras are intact from the American edition of the box-set and are mainly concentrated on the seventh disc, although the odd extra is available on each of the other discs. There is an interview with Chris Carter, which may already be on the feature length videos, along with loads of 10 and 20 second TV trailers for each episode which get extremely irritating after a while.

The seven discs are presented in a pleasant fold out box-set, although I suspect that the paper case spines could become damaged over time. The booklet is quite useful, with chapter listings for each episode, even if the subsequent episode listings of the other seasons are a little useless.

So, if you are a fan of the X-files then this box-set is a real must purchase. On the other hand, if you already own the relatively expensive season video box-sets and feature length episodes it would be hard to justify purchasing this set. Mind you, one advantage in owning the DVD set is the fact that each episode is easily accessible and even has chapters. X-cellent!