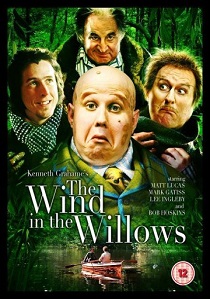 ReviewTV SeriesFamilyFantasy
Review Article Go back to homepage
Follow the misadventures of Mole, Ratty, Toad, Badger, and the other eccentric woodland creatures as they get up to all sorts of humorous high jinks in a live-action adaptation of the Kenneth Grahame classic book.
Matt Lucas, Mark Gatiss, Lee Ingleby, Bob Hoskins, Imelda Staunton, Jim Carter, Anna Maxwell Martin
Television, Family, Fantasy
2
1 Hour 38 Minutes
Thank you for supporting DVD365.net when you order using the link(s) below.
Buy DVD
Story

The Wind in the Willows tells the timeless story of the adventures of four animal friends. Adapted from the much-loved classic book by Lee Hall, writer of the Oscar nominated and multi award-winning film Billy Elliot, the film stars Matt Lucas as Toad, Bob Hoskins as Badger, Mark Gatiss as Rat and Lee Ingleby as Mole. They are joined by Oscar nominee Imelda Staunton as the Barge Lady, Jim Carter as the Engine Driver and BAFTA award winner Anna Maxwell Martin as the Gaoler's daughter.

When shy Mole leaves his hole one spring and is entranced by the world he discovers along the riverbank. Befriended by the water-loving Rat, he soon encounters Mr Toad, an enthusiastic and mischievous lover of all new things, especially fast cars. But Toad's irrepressible nature and love of motoring get him into serious trouble. With the help of wise old Badger, can the woodland friends come to his aid? And will Toad ever change his ways?

The picture is bright and colourful with an impressively high level of detail throughout. However, it's also been over saturated to give it that "fairy tale" look of a rich and pleasant land in which to inhabit. And on the whole it all works very well, with the panoramic views of the riverbank looking wonderfully inviting with the need for too much intervention from the hand of the computer. Unfortunately, this rich and over saturated picture does cause the occasional problem with picture noise, but it all holds together well with very little artifacting or outlining. Also, with it being a television production, there are no problems with print damage.

Being a British terrestrial broadcast on the BBC, the audio is restricted to a mere 192 Kbps Dolby Digital 2.0 stereo soundtrack. Given that the BBC is slowly but surely embracing HD and the money spinning sell through market, I'm very surprised that a 5.1 soundtrack wasn't available. Still, whilst the supplied soundtrack isn't a particularly dynamic one, your pro-logic system will make a good attempt to impress with some clear and precise dialogue and soothing musical score. You don't even need a surround system to get results and your humble television speakers will perform just as well.

The menu is pleasantly (if not a tad obviously) animated with the various characters and accompanied by the sounds of the country. It's all so well in keeping with the Wind in the Willows. Whilst the extras don't really add up to much, with only a Documentary and Photograph Gallery on offer, it is a collection that will surely keep the adults entertained and adds value to the package.

The only highlight of the featurette are the occasional clips of Bob Hoskins showing his interest, knowledge and skills and some of the on set interviews with the other cast members. Running for two minutes, and accompanied by music, the Cast and Crew Photo Album is simply a slideshow of various behind-the-scenes photographs. Running for three minutes, the Friends of the Riverbank is another slideshow, but this time it's a collection of stills taken from the programme. Finally, and although I don't class them as an extra, the main feature and behind the scenes featurette is provided with English subtitles.

The Wind in The Willows must have been filmed and re-filmed more than most other books, so it's hardly surprising that the folks at the BBC would have another pop at a version ready for a prime Christmas showing. Mind you, there's a good reason for the continual interest in the storyline as Kenneth Grahame's classic book really is such inoffensive family entertainment that would keep even the most fidgety of young children happy for hours. So when Matt Lucas is playing Toad and Mark Gatiss is play Ratty, you already know that it's going to be something ever-so-slightly special. After all, even the members of the Monty Python team had a serious crack at it too.

Although the film is suppose to be set amid the glorious countryside that is associated with England, it was actually filmed in a far flung location - Bucharest. Whether this was because the BBC felt it would be cheaper to do so, or because we've concreted over far too much of our idyllic countryside, is a little worrisome - especially since the Romanian countryside looks rather tranquil and, dare I say, English indeed. But, after all, this is a world famous BBC production so most of their CGI and location budgets have already been splashed on Doctor Who or the new opening titles to the Six O'clock News.

So with its modest budget, it's left to the likes of Matt Lucas and Bob Hoskins to provide the delightful and inoffensive entertainment (unless you're related to a weasel that is). Whilst this DVD won't keep the older children entertained, families with younger viewers (or the easily pleased - like me) are sure to be entertained for the duration of the film. The only fly in the ointment is the rather steep RRP, although search on-line and things become all the more reasonable and worthwhile.

Special Features
Related Articles
Innocent, The A Word: Series 2, Inspector George Gently: Series 8, Line of Duty: Series 4, The Five, Our Zoo, George Gently: Series 6, Best Laid Plans, Doghouse, The Wind in the Willows, Master and Commander: The Far Side of the World (Special Edition), The A Word: Series 3
Paddington 2, Finding Your Feet, Paddington 2, Gypsy: The Musical, Pride, Maleficent, Much Ado about Nothing, Arthur Christmas, The Pirates! In An Adventure With Scientists, The Awakening, Harry Potter and the Deathly Hallows: Part 1, Cranford: The Specials, Three And Out, Harry Potter and the Order of the Phoenix, Freedom Writers, The Wind in the Willows, Chicken Run, Harry Potter and the Order of the Phoenix, Three and Out, A Confession, Downton Abbey: The Movie, Maleficent: Mistress of Evil, Flesh and Blood, Talking Heads, Vera Drake
Motherland, And Then There Were None, Death Comes To Pemberley, Accused: Series 2, Line of Duty: Series 5, The Night Watch, Motherland: Series 2, Motherland: Series 3, Hollington Drive
The Mercy, League of Gentlemen: Anniversary Specials, Doctor Who: Twice Upon A Time, Gunpowder, Denial, Sherlock: Series 4, Sherlock: The Abominable Bride, Wolf Hall, Sherlock: Series 3, Sherlock: Series 2, Winnie the Pooh, Sherlock, The Wind in the Willows, Starter For 10, The League Of Gentlemen's Apocalypse, Sex Lives of the Potato Men, Christopher Robin, Christopher Robin, The Favourite, The Father, Inside No.9: Series 7, Operation Mincemeat
Doctor Who: Series 10 Part 1, A Midsummer Night's Dream, Pompidou, In Secret, The Harry Hill Movie, Small Apartments, Come Fly with Me: Series 1, Gnomeo & Juliet, Les Misérables: 25th Anniversary Concert, Shooting Stars, Alice In Wonderland, Little Britain Abroad, The Wind in the Willows, How To Talk To Girls At Parties, Sherlock Gnomes, How To Talk To Girls At Parties, Missing Link, The Queen's Corgi, Les Misérables: The Staged Concert
Mona Lisa, Super Mario Bros: The Motion Picture, Outside Bet, Will, Brazil, Mussolini And I, Outlaw, The Wind in the Willows, Hollywoodland, Enemy at the Gates, Outlaw, Unleashed, Vanity Fair, Who Framed Roger Rabbit, Who Framed Roger Rabbit
Downton Abbey: Series 6, Downton Abbey: Series 5, Downton Abbey: The London Season, Downton Abbey: Series 4, The Wind in the Willows, Swimming With Men, Downton Abbey: The Movie, The Good Liar, Downton Abbey: A New Era
Comments
RecommendedView