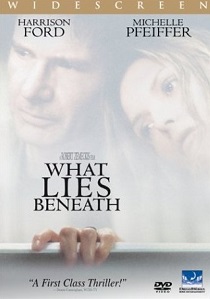 When Norman and Claire Spencer's daughter heads off to college, Claire starts getting obsessed about their new neighbours and is convinced that the husband killed the now missing wife. However, Norman just puts it down to the fact that she's missing her daughter and suggests that Claire seeks some therapy (which always appears to be the best solution for an American!).

When Claire starts to get supernatural feelings she assumes that is it the ghost of the murdered wife trying to contact her and she starts to search for an answer. However, when she meets the fit and healthy wife, and with the feelings still continuing, she decides to look for answers closer to home resulting in life threatening consequences.

With the majority of the film taking place in dimly lit rooms and during the night, this film is a good test for the DVD technology. Fortunately, the film passes with flying colours and manages to produce a picture with plenty of clarity and detail at all times. Although it only has an average bit rate throughout the film there's no artifacting and only one occasion where I thought there was a small amount of outlining.

As the film is mostly dialogue based, with only the weather providing the occasional ambient effect, the surround channels are sparsely used nor are there any thundering LFE's. However, putting that to one side, the dialogue is crystal clear and doesn't suffer from any bleeding to the other front channels.

The menus are interesting scored and animated with a good introduction, although I felt it did give away a bit too much about the story lines progression. There's the usual Theatrical Trailer and Production Notes along with an interesting Making of and excellent Directors Commentary.

Dreamworks are really starting to get their DVD act together, I just hope that they continue this excellent work outside the R1 zone of America. With the failures of many expensive CGI films in the past, it makes a refreshing change to see a horror thriller which does it the good old fashion way. The shocks are created without the need of blood and gore, but with simple reflections in mirrors and water. It also manages to force you to use that much under used piece of gray matter.

The only problem with this film is that it tries too hard to be scary and just ends up being a predictable thriller. All of the shocks are so obvious that you can just sit there predicting what will happen next, although there are still a few scenes that still manage to make you jump.

Although enjoyable from start to finish, it had too much of a Hitchcock feel to it. Trouble is, he'd have done it so much better.

#HappyBirthday #MichaelSheen. Help them celebrate their 54th year with #Quiz available on #DVD