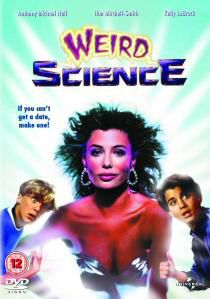 Garry Wallace and Wyatt Donnelly are not the most popular guys in high school. They even got beaten up at the home coming. With Wyatt's parents away for the weekend Gary is staying over and the pair sit down to watch the late night movie Frankenstein. And that's when Garry has a brilliant idea. Why not create a girl of their own? Not physically of course, that would be just weird, but in Wyatt's computer where they can ask it questions and put it in sexual situations. Oh, and they could play chess with her too. Not peculiar at all really is it?

So they start programming the computer, but with processing power in the 80's not quite up today's standard all the computer can offer is a fifth grade thicko. More computer power is needed so they go on-line and hack into a super-computer. Soon the programme is creating a woman and thinking for itself and it's time to put the ceremonial bra's on their heads and get ready to run the programme.

But Wyatt has created something far more powerful than he could ever imagine and upon running the programme the computer goes wild, strange things start happening to the house and neighbours and there's a strange and beautiful woman standing at the bedroom door. Garry and Wyatt have created their very own woman and she's got an array of interesting talents which will go along way to help Gary and Wyatt the popular guys they long to be.

Although it's a rather dated film the picture is in a surprisingly good condition and has been cleaned up very nicely indeed and exhibits few problems with grain, dust specks and other print problems. The picture is reasonably colourful with a good level of detail and colour depth and doesn't suffer from many artifacting or outlining problems. However, there is a slight problem with the contrast level which can be a little overbearing at times. Never the less, for a film which is nearly twenty years old Universal have done themselves proud. If only all other back catalogue material was treated in this manner.

This DVD re-release is trumpeted as having remastered DTS and Dolby Digital soundtracks - a vast improvement to the original vanilla Dolby Stereo release. Whilst teenagers growing up in the eighties may well remember the films music, and perhaps even the excellent theme music, many will be left wondering why Universal bothered to spend the time and effort in remastering the soundtrack for this rather dated back catalogue item. Well, crank up the volume and the eighties soundtrack will either have you blushing with embarrassment, questioning the sanity of people growing up in the eighties or singing along loudly as your brain suddenly remembers the tunes of the day.

But there is more to a film than just the musical score. Whilst the general audio remastering has been a great success you can only work with the material you're provided with. As a result the dialogue in the centre channel can only be classed as average as it tends to get in a bit of a muddle once all the other channels become busy. The rear channels are also used to good effect with the various explosions and lightning effects enveloping you in the on screen goings on. There's never been a better time to hear Kelly LeBrocks's plumb, and extremely grating, British accent in Dolby Digital and equally impressive DTS.

After the High School Reunion Collection trailer the main menu is displayed. This menu is scored with the main theme music with a nice bit of animation around the titles. The sub-menus are static and silent but they fade in and out nicely and the menu backgrounds at least show a bit of enthusiasm.

Extras wise there is very little to keep you interested with only a poor quality Theatrical Trailer and a static menu recommending other DVD titles. So where was the audio commentary track or photo gallery? It's not as if the two male leads in the film are household names and it's about time filmmaker John Hughes provided an audio commentary. After all, Hughes created some of the most popular films of the 1980's.

With titles in the High School Reunion Collection obviously aimed at the people now in their thirties, Universal are banking on people reminiscing about their teenage years and stocking up on their favourite films of the time. I was caught by their devilish spell, even selling my old video copy in order to upgrade, and ended up with a DVD which filled the coffers of Universal with little or no effort on their behalf. It's no wonder the film studios love releasing back catalogue material on DVD.

Trouble is, extras or not, you've just got to reminisce, laugh at the awful clothes (nah, I never had anything like that) , chuckle at the technology (cor, is that a Commodore 64?) and recoil at horror on remembering you use to like the music (Oingo Boingo who?). Now where did I put my Chaka Khan CD?