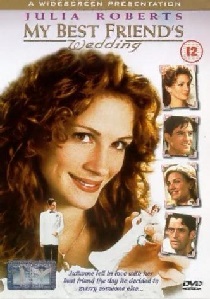 ReviewComedyRomanceJulia Roberts
Review Article Go back to homepage
When Julianne Potter's long-time friend Michael says he's engaged, she realises that she loves him herself and must do everything she can to split the happy couple up.
Julia Roberts, Dermot Mulroney, Cameron Diaz, Rupert Everett, Philip Bosco, M. Emmet Walsh, Rachel Griffiths, Carrie Preston, Susan Sullivan, Christopher Masterson
Comedy, Romance
2
1 Hour 41 Minutes
Thank you for supporting DVD365.net when you order using the link(s) below.
Buy DVD
Story

Julianne is a Chicago restaurant critic and she and Michael have been former lovers and best friends for years. They promised to marry if they weren't married by the time they'd reached 28 and weeks before her 28th birthday she receives a desperate message on her answer-phone. With Michael still being single she suspects he might just be about the pop the questions.

However, Michael has some devastating news for Jules - he's due to get married in three days time and he wants her to come to Chicago and help him through to the wedding. Julianne realises that she loves him and has no intention whatsoever of allowing the wedding to go ahead and she plots to split the couple up and take her prize.

When she meets Michael's fiancée, Kimberly, she realises that it will use all of her talents to pull the couple apart. Things are made even worse for Jules when soon after meeting Kimberly she asks her to be her matron of honour. With each of her plans failing by the day, Kimberly is soon forced to send for reinforcements in the form of her gay editor George.

The picture is bright and colourful with rich vibrant colours. It has an above average bit-rate and there is no sign of artifacting in this excellent anamorphic transfer. For an early entry into the region two DVD market this disc certainly holds itself up well against many of the newer titles. The sound is pleasantly surprising. There is the occasional use of the surround channels for ambient effects and the dialogue if fixed into the centre channel without any bleeding.

The sound has a real richness and clarity to it which really enhances the film, especially the brief scene of the wedding ceremony and the three kids singing with helium.

The extras don't add up to much, with the standard trailer becoming a little tired, you still have to remember that this was one of the early discs in the region two area so it was rather well specified.

Although I really enjoyed this film, with plenty of amusing moments, I thought it was a bit of a bizarre subject to make into a romantic comedy. Was it only me who thought that someone attempting to break up a relationship was just a little bit nasty? If you are a fan of Julia Roberts and/or Cameron Diaz then it is definitely worth an investment.