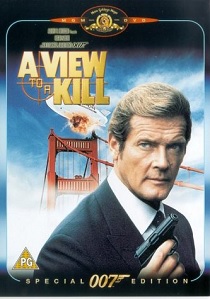 When a silicon chip is recovered from the frozen body of 003 in Siberia, the British discover it is identical to a prototype designed to withstand the intense electromagnetic pulse of a nuclear blast.

The British suspect that the billionaire industrialist Max Zorin is leaking details of the design to the Russians so Bond is dispatched to his chateau to investigate. Arriving at the chateau Bond is initially interested to learn why Zornin's mediocre horses manage to win so many races. It is there that he discovers strange goings on in his stables and that his doctor, and close companion, Carl Mortner have developed a untraceable steroid to give their horses the final boost they need to win a race.

However, this is only small fry to Zorin and his bigger plans in America. Bond discovers that in a world with a computer chip glut, Zorin is manufacturing and stockpiling silicon chips and, mysteriously, drilling near the San Andreas fault. With local fishermen reporting dwindling stocks and oil field owner Stacey Sutton being hounded to sell her worthless wells, Bond suspects that Zorin is attempting to destroy silicon valley and corner the market in computer chips.

The picture is bright and colourful with a high bit-rate throughout the film. There's no sign of artifacting or outlining along with very little picture noise or imperfections. However, I thought that the daylight pictures tended to be a little too bright and washed out at times, although the darker and night time scenes were excellent.

Fortunately, the sound is vastly improved on the previous film Octopussy with the excellent Duran Duran soundtrack booming out in all of the channels. The surround channels are used extensively throughout the film and even before you've had the chance to sit down and open a bottle of beer the rear channels are brought into life. The dialogue is wonderfully crisp and clear in the centre and is perfectly balanced between the action effects. This is quite possibly one of the best Bond soundtracks.

Even more disappointing was the extremely boring drone of an Audio Commentary with only the occasional interesting quip from John Glenn. Fortunately, Patrick Macnee is not totally forgotten as he narrates the interesting documentary "The Bond Sound" which ventures into one of the most recognisable, and dramatic, movie scores. There's even a Deleted Scene which is so good it should have been in the movie.

This is Roger Moore's best, and final outing, as 007 and he choose the best time to hand in his famous Walther PPK and call it a day. Roger was starting to look a bit too old for the womanising agent, especially when some of the Bond girls could have been his daughter, something which he freely admitted in the documentary.

There's plenty of the usual one liners, with one in particular worth a mention. Whilst talking to a young lady returning from an early morning horse ride she exclaims "Yes, I really enjoy a good ride in the morning". That definitely raised an eye brow from a certain secret agent. However, there's still one thing which puzzles me about Bond - why the hell would he want to bed Grace Jones!?

Special Features
Related Articles
The Addiction, Nine Lives, The Jungle Book, Eddie The Eagle, Jersey Boys, Heaven's Gate, Stand Up Guys, A Late Quartet, Seven Psychopaths, King Of New York, Kill The Irishman, King Of New York, Hairspray, Click, Antz, Batman Returns, Blast from the Past, Catch Me If You Can, Catch Me If You Can, Excess Baggage, Man on Fire, Sleepy Hollow, The Stepford Wives, The Deer Hunter: 40th Anniversary
Tower Of London, The Living Daylights, Octopussy
Tourist Trap
The Wild Geese, The Wild Geese: Special Edition, For Your Eyes Only, Live and Let Die, The Man with the Golden Gun, Moonraker, Octopussy, The Spy Who Loved Me, The Quest
The Avengers: Series 4, Return Of The Man From U.N.C.L.E., The Avengers: Season 6, The Avengers: Series 5, The Avengers: Series 4, The Avengers: Series 3, The Howling: Special Edition
Diamonds are Forever, For Your Eyes Only, Goldeneye, License to Kill, The Living Daylights, The Man with the Golden Gun, Moonraker, Octopussy, On Her Majesty's Secret Service, The Spy Who Loved Me, Thunderball, Tomorrow Never Dies, The World is not Enough, You Only Live Live Twice
Comments
UHD Releases News Pick