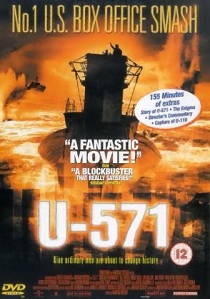 It is 1941 and German U-boats are wreaking havoc in the North Atlantic. They are sinking Allied ships with impunity and threaten to cut off the supply line from America to Britain. When some allied shipping manages to disable a U-boat a secret mission is launched to capture the enigma machine, a device that German's use to report the positions of the allied shipping without alerting the Allies.

Masquerading as a German re-supply ship, and after a brief gun battle, they capture the U-571 only for their submarine to be destroyed leaving them stranded on the Nazi u-boat with a skeleton crew. They are left with no choice but to make running repairs to the submarine whilst they deal with a German destroyer and submarine as they desperately try to reach land with the enigma machine intact.

The picture on both versions are outstanding with a high bit-rate throughout the film. The is no signs of artifacting or outlining and the dark and dingy scenes in the submarine are handled superbly with rich and vibrant colours. It is certainly a demonstration worthy disc.

The region two edition only comes with a Dolby Digital soundtrack whilst the region one edition has a superb DTS soundtrack. The difference in the dynamic range of the DTS and Dolby Digital soundtracks was clearly audible, especially during the depth charge attack by a German destroyer which had the walls vibrating and the subwoofer working overtime with the huge number of explosions and effects in all channels. U-571 is certainly a surround sound enthusiasts delight as no channel is left idle for very long. However, the Dolby Digital soundtrack is as equally impressive, although it comes nowhere near to matching the DTS.

The region two edition menu is static but scored with submarine noises. Other than that it is quite disappointing when compared with the excellent animated menus on the region one edition. The menus are excellent with each menu selection greeted with a torpedo thundering across the screen. It is just a pity that the subsequent menus were not also scored and animated. Oh well, you can't have everything.

For the historical inaccuracies, let's face it the British captured the enigma machine, and to be fair the extras acknowledge this fact, this is still one cracking good film with brilliant suspense, picture and sound effects. It is a perfect setting for the ambient effects in a submarine with the groaning metal work and clanking chains.

Although the region two edition gives the region one version a run for its money on the extras, with the important documentaries intact, it has to be the awesome DTS soundtrack along with the impressively animated and scored menus on the region one edition which makes it the clear winner.