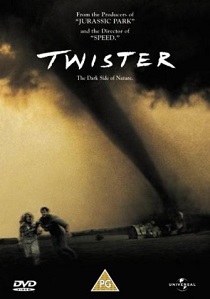 The film is a roller-coaster chase across America. Bill has gone to get his ex-wife Jo to sign their divorce papers so he can marry Melissa. Now a successful weatherman, Bill misses life in the fast lane and decides to tag along just one more time.

At first Melissa is happy to let him...Things change. The two teams race to be the first to get the readings from their relevant machine, Jo's being a cheap and cheerful homemade job, whereas Jonas has gained massive funding for his but he doesn't have the instinct that Bill has.

The picture is reasonable enough with a high bit-rate throughout the film without any artifacting or outlining, although it does suffer from the occasional picture imperfection and can look grainy at times. The colours are rich and colourful, if too colourful, which give it that straight from NTSC conversion look. However, it's good enough to keep you watching, even if the script does its best to make you want to watch something else

The sound mix awesome with some brilliant use of the surround channels and the faithful subwoofer in probably one of the best sounding DVDs to date and superb demonstration material. You are quickly introduced to what your sound system can produce in the first five minutes of the film when a tornado hits a small farm. The subwoofer nearly rattled itself apart, my fillings were loosened and the surround speakers nearly fell over.

Even when there's no action the surround channels are still occupied with weather effects. Absolutely bloody marvelous and worthy of the price of the disc alone - just wait until the "big one" towards the end of the film.

The extras on the disc are pathetic to the point of being worthless. It's a typical nasty generic static and unscored menu favoured by our friends at Universal with all those silly icons. Are we incapable of reading the words "Theatrical Trailer"?

The film feels a little shallow, with the bare bones of a script leaving you wondering what you've just watched, apart from a big tornado. Okay, the special effects are at times awesome with the twister picking up petrol tankers and dropping them in the path of the chasing teams, but if you remove brain before inserting the disc then you're in for a surround treat - just remember to calm down the cat and invite the neighbours!