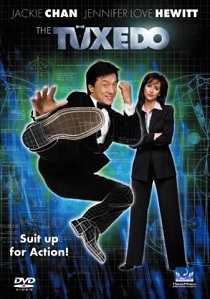 Jimmy Tong is a taxi driver, and a good one at that. He's attracted the attentions of the CSA (no, not the Child Support Agency but some top secret organisation with an array of gadgets and secret agents) and his skills have resulted in a change of job, and large pay increase. Jimmy can kiss the world of the annoying passenger goodbye as he's now employed as the chauffeur to wealthy industrialist Clark Devlin. However, Devlin's real job is as a secret agent for the CSA. Devlin is as charming as James Bond, with the chat up lines to match, and Jimmy soon witnesses first hand the many women falling at his feet.

As Devlin's chauffeur Jimmy is expected to stick to a huge array of rules, so many in fact that it would have made Howard Hughes look normal. But Clark is more down to earth than his personal assistant makes out and he's more than happy to help Jimmy with his failed attempts at chatting up women. However, Clark does have one rule that Jimmy must obey - Never touch his prized tuxedo. But when Devlin is put out of action by a suspicious accident, Jimmy puts on the tuxedo and discovers that this extraordinary suit is more black belt than black tie.

Jimmy becomes an unwitting, if impeccably dressed, secret agent when he's paired with Del Blaine, a rookie agent who thinks Jimmy is Clark Devlin, as they continue Devlin's original investigations into the mysterious Diedrich Banning. Thanks to the worlds love of strangely named and shaped bottled water, Diedrich has become a vastly wealthy businessman selling his bottled water all around the world. However, he still wants more and has plans to infect the entire worlds water supply with a virus and then sell his pure, and naturally free from disease, bottled water at a hugely inflated price. Can the inexperienced Jimmy and his super-tuxedo save the day?

The picture is bright, vibrant and colourful with a high level of detail throughout. During the many night time and dark interior scenes the colours still manage to remain well defined with good depth and the many fast action scenes were handled by the encoding process with ease. The bit-rate also remains high throughout and there is no sign of artifacting or outlining. The CGI effects blend in perfectly with the live action moments and the print is clean and free from any dust scratches or other picture imperfections.

For an action film the sound is a little on the disappointing side. Whilst the dialogue is crisp and clear in the centre channel, with a good all round performance in the front channels, when it came down to the action scenes the surround channels were rather underused. Never the less, it still manages to envelop you in the action. It's just a pity that it didn't go that little bit further and deliver the potential is really had.

The menu system is pleasantly animated and scored and there's a fairly decent set of extras to accompany the film with a making of featurette and number of deleted and extended scenes. With the film not being that overly long it is hard to see why some of the scenes were cut, although some are rather mind numbingly boring and were correctly removed from the final cut. Again, the same could be said of the extended scenes, although I'm sure James Brown will be rather annoyed to discover that the only way you'll see him singing is in the deleted scenes section.

Whilst a number of the outtakes are shown in the closing credits there's a huge number of highly amusing outtakes that would make even the most hardened of people raise a chuckle. Although they are essentially just Jennifer Love Hewitt falling about laughing, and by the sound of it getting the director rather annoyed, they all manage to show just how affable Jackie Chan is. If you ever go to Hong Kong you'll soon discover that Jackie Chan is revered to the point of being a God. And by watching these outtakes and the making of documentary you'll soon see why. Ok, so he may have some big-star grumpy off days, but he does genuinely act and sound like a nice guy.

Whilst the casual film fan is sure to enjoy the comedy antics, fans of Jackie Chan are going to be disappointed with the lack of true fighting action. You only have to watch the films closing credits and the outtakes to see that very little of them involve fighting scenes, and even then they aren't the usual bone crunching ones we all know and wince at. Like Jet Lee in The One and Romeo Must Die, the film has ultimately relied too much on CGI and not enough of Jackie strutting his stuff. Indeed, Jackie once stated that his Hong Kong films were high on action and real life threatening explosions because they couldn't afford the CGI so they just did it for real. Now that's what an action film is all about, taking risks with your cast!

Jackie Chan's venture into Hollywood really did show promise with Rush Hour and Shanghai Noon, but both sequels never really lived up to their expectations. Whilst The Tuxedo certainly had the potential to be a cracker, Jackie was let down by the lack of action and the usual poor script (what is up with Hollywood these days?). He really does need to get back to what he does best - kicking ass without ropes or CGI. But, at the moment at least, I suspect that this is something that Hollywood just can't offer.