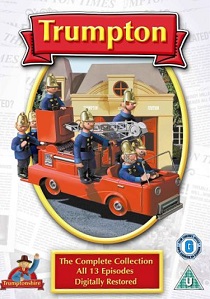 "Here is a box, a musical box wound up and ready to play..." In 1966 when these words were first broadcast on BBC One it signalled the birth of a brand new style of children's animation. It was conceived with the new invention of colour television in mind and went onto become a children's classic, on-air for the next 30 years. Now the classics of Trumpton, Camberwick Green and Chigley are being released on DVD so that idle students, nostalgia seeking thirty-something's, and yes, even children can enjoy children's entertainment from a more innocent age devoid of cartoons and I-Pods. Voted the 22nd greatest programme in a recent Channel 4 poll of the 100 greatest Kids TV Shows of All Time, Trumpton is the first of the three series to be remastered and released on DVD.

Trumpton is the largest of the three settlements in Trumptonshire with the other two being Camberwick Green and Chigley. Trumpton is essentially based around the Town Hall and the towering and rather grand looking clock. The town hall is presided over by the Mayor, with help from Mr. Troop the town hall clerk and the services of their chauffeur, Philby, who happily runs the major around his domain in an open top car. The town centre contains a vast array of shops including Mr. Clamp the greengrocers, Mr. Munnings the printer, Mr. Platt the clockmaker and Miss Lovelace the hat shop owner. But where would we be without Mrs. Cobbett the flower seller, the Trumpton Fire Brigade and carpenter Chippy Minton and his son Nibs to name but a few.

Each week some minor disaster of one cause or another brings an urgent phone call to the Trumpton Fire Brigade. Once the call is received Captain Flack rings the alarm bell and Pugh, Pugh (yes, there are two of them), Barney Mcgrew, Cuthbert, Dibble and Grubb all scramble for roll call and then head for the incident. However, as incidents go, these are no warehouse fires or train derailments, but more like the Mayor loosing his hat in a gust of wind or the important placement of advertisements for the Fire Brigade's band concert on the bandstand in the park. It's no wonder that Captain Flack is desperate for a real fire. Perhaps he's a but of an arsonist in waiting.

To celebrate the programmes 40th anniversary, each series has been fully restored using state-of-the-art technologies to reproduce the original broadcast quality of colour and sound. Unfortunately, it doesn't appear that this state-of-the-art technology has worked particularly well. Sure, they may not have been able to track down the original masters (knowing the BBC, the tapes were probably reused to record Nationwide) and it may indeed look like the original broadcast quality, but not only is the picture extremely grainy with a poor level of colour and detail, but in a number of episodes the picture is extremely unstable with an image that wobbles more than your view of the world after ten pints of lager. Still, it was from 1969 and you can't always expect miracles. Never the less, I just hope that the image stability issue was a problem with my preview copy.

The 224Kbps Dolby Digital 2.0 soundtrack is not going to inspire any Hollywood sound recording artists, but the audio is reasonably clear and audible with Brian Cant's singing voice just as annoying now as it was back then in 1968. Naturally, given the programmes rather ancient vintage, that expensive surround system can be dispensed for your ordinary television speakers. Again, given the level of audio quality on offer here, it's actually quite hard to identify just where this state-of-the-art technology was applied.

The menu is nicely animated and scored with some good transition effects between the menus. Each of the thirteen episodes can either be played in one go (if you fancy a three hour sitting) or individually selected from a menu. Extras wise, the main, and only really, extra is the three minute Creating Trumptonshire with Gordon Murray featurette. Along with some very poor quality footage, with excerpts taken from BBC's Animation Nation, creator Gordon Murray talks about his world and the animation processes involved. Things are rounded off with a Trailer Gallery for Right Entertainment's other titles Trap Door, Trumptonshire, Lavender Castle, Postman Pat and The Great Dinosaur Hunt and Little Red Tractor - Glorious Mud. They're all children's titles, but then again, it's hardly surprising since the disc is aimed at the younger end of the market.

The brainchild of Gordon Murray, the remarkable Trumpton was narrated by that most famous of children's television presenter Brian Cant. Enthusiastic to the last, his singing skills were hardly going to win the X-Factor, but his distinctive voice and his embarrassing acts on Play School were synonymous with children's television for a whole generation. Produced by using the skills and patience of stop frame animators, Andrew and Margaret Brownfoot, this wonderful series proved to be an instant success that educated a generation.

But what of the town of Trumpton now? I'm sure the police station would have been closed down, the clock broken down due to lack of funds, the park vandalised and Mr. Craddock the park keeper made redundant to save money. And as for Mr. Clamp the greengrocer and Mrs. Cobbett the flower seller, that new out of town shopping supermarket would have put an end to their entrepreneur endeavours. Oh, and Mr. Prescott will have plans for another 30,000 houses to built in Trumpton whilst the town is gridlocked and begging for a bypass to Chigley. Ah, the innocence of childhood and an age long gone with only vast amounts of cynicism and grumbles to look forward to.

Needless to say, this disc is a bit of a gem. Running for a massive three hours of nostalgia, it's the perfect antidote to today's hectic and strained lifestyle. You never know, even today's children brought up on a trashy diet of violent cartoons, and Blue Peter, may even find it a refreshing change to our imported entertainment. Whilst the "fully restored" tag seems to be a bit of an overstatement, with a picture looking far from it times, it's still a wonderful series to own on DVD.