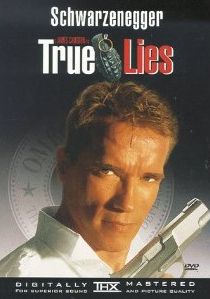 Whilst tracking down a group of terrorists Harry's life is shattered when he suspects that his wife Helen is having an affair. Using all of this special agent tactics, and work friends, he soon discovers that his wife's lover is nothing else but a fake using a secret agent story to bed women.

Getting more and more obsessed with his wife's activities he creates a sting operation to catch the pair. On capturing the pair Harry interrogates Helen, still without her knowing his true identity, and sets her up as an agent with the ultimate plan of revealing his true identity.

Unfortunately, during this operation the terrorists interrupt their 'mission' first. They take the pair to Florida keys in order to film Harry identifying a nuclear device which is to be detonated there. With his true identity now revealed to his wife, and his family identified to the terrorists, the pair must fight them before they unleash their other nuclear weapon in a populated area.

For a THX certified disc I would have to say that the picture during the daylight scenes can be rather washed out, pinky and at times grainy. Nevertheless, the majority are still impressive. There are also quite a few whiskers in places making me wonder where the film stock came from.

However, it is the 5.1 mix that is this films biggest quality with so many stand-out moments. The surround separation is remarkable. Again, like the X-files film, Fox assumed that the viewers preferred soundtrack is only 2.0 pro-logic. It was only after five minutes that I realised the lack of surround and I ended up restarting the film to watch the fantastic 5.1 introduction. The music appears all around the soundstage and the rears channels are very active throughout the film. During a particular gun fight scene a machine gun falls down some stairs, firing as it falls. Each and every used shell can be heard on the right of the soundstage dropping on to the stairs with a final thud as the gun reaches the ground.

The special effects are also commendable. During the final battle with the terrorists, the harrier jet that Harry uses is just a large wooden model. The effects team bring it to life with missile trails and heat from the jet exhausts. It is extremely realistic and at the time it was at the cutting edge of computer animation.

The animated menus are very effective, and noisy, with a hand grenade and harrier jump jet rotating around the screen. This DVD has probably the best surround mix yet, a demo disc for sure. It is just a pity that there are so few extras.

It is a typical Schwarzenegger action film with plenty of special effects, dead bad guys and subtle humour, especially during one of the chase scenes when Harry is chasing a terrorist through a hotel on a horse. The other characters also add to the film, especially the fake spy Simon.