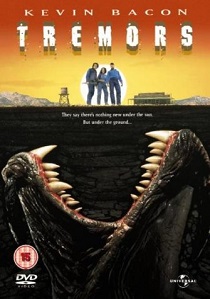 Val McKee and Earl Basset are handymen living in the Nevada town of Perfection, but perfection it certainly isn't. With the towns population in single figures, and the only meeting point the towns single store, they've had enough and pack up ready to leave for good. However, just as they head off to civilization they come across a number of bizarre murders and decide to head back to town.

Together with a female seismology student, who is taking peculiar seismic readings in the area, the boys discover that their desolate towns population is not been stalked by a desperate murderer, but by a group of underground man eating creatures hungry for food, and plenty of it.

Not wishing to stay around, the town decide to make a run for it before the monsters can finish snacking on them. Unfortunately, the underground monsters are more intelligent then they expected and they need to use all of their skill, and luck, to make a plan to escape before the town is finally overrun by the creatures.

The picture is just awful, and a prime example of just how not to produce a DVD. Although the bit-rate is continuously high during the film, the picture suffers from outlining, graininess, imperfections, washed out colours and picture noise. Even the VHS version gives this disc a run for its money. If a film was ever issued for pure profit then this disc is a prime example of companies taking advantage of the DVD boom.

The sound doesn't get much better as the film is only presented in pro-logic. There is the occasional use of the surround channel, and the dialogue is clear enough in the centre channel, but when you become use to the wonders of Dolby Digital and DTS then this soundtrack is a big, big disappointment. However, I'm a little puzzled about the soundtrack for this disc. After the creatures have attacked the town for the first time, Kevin Bacon can be seen mouthing "Mother f**ker" whilst "Mother honker" comes out of his mouth. Either this was deliberately retained to obtain a lower certificate, or somebody has lost the original soundtrack.

The static and silent menu is boring and uninteresting with the occasional picture of cast taken from the film. To be honest, with the state of the picture and sound I was not at all surprised by the state of the menu. However, the only plus point on this disc are the extras, but to more exact, one extra in particular.

As well as the usual Trailers and Production Notes there's an amazing 50 minute in-depth Documentary which charts the film from rough ideas to final print. Although the extras list a trailer for Tremors II on the back of the box, I couldn't find it on any menu.

For the very small budget allocated to the film, resulting in the wonderful cheesy look, the tacky special effects are superb and really enhance the enjoyment of the film. Since the creatures spend most of their time underground, and thus invisible, the limited special effects budget was hardly going to be straining at the seams.

However, what makes this film is the comedy. The way the characters play off each other, especially the "buddy" banter between Earl and Valentine, is just so funny. Although the extras are good, they can't be used as an excuse the poor picture and sound quality on this disc. Ok, so it wasn't a major blockbuster film, and the available film stock may have been a little poor, but by not making any attempt to clean up the picture or re-master the soundtrack Columbia have ruined what is a true classic comedy/horror flick. Shame on you.