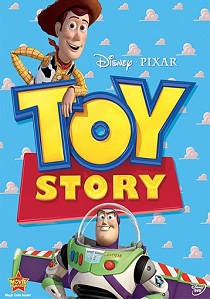 In the first film a new a space-ranger toy called Buzz Light-year takes over Woody's place as Andy's favourite toy. Naturally, Woody doesn't take to kindly to the situation and attempts to get rid of him. Buzz accidentally falls out the bedroom window and Woody is accused by all the other toys of having killed him. Woody leaves the house in search look for him but ends up in the neighbours garden and the hands of Sid, a child who takes great pleasure in blowing up toys.

The second adventures sees Andy off to summer camp and the toys facing a new crisis. Woody attempts a daring rescue of a toy doomed to be sold at a garage sale. With the toy saved things go wrong when a toy collector notices Woody and attempts to buy him. When Andy's mother refuses to sell him the collector steals him instead and it's now up to Buzz and the gang to set out on a daring mission to rescue their friend.

The picture quality on both films is simply stunning. With the film being totally generated by computer, and at times so realistic that you had to pinch yourself. The bit-rate does fluctuate wildly, but there is no degradation in the picture quality at all, and the varying rate is to be expected with computer animation.

This THX certified disc has an interesting extra which true home cinema fans will really relish. THX has developed a new system called Optimode where the home user can fine tune both the audio and video components. A number of menus allow the user to test the contrast, brightness, colour, hue and aspect ratio settings. It also has a number of tests for speaker phases and LFE channel crossover.

If you've bought the standard box-set without the supplemental disc then there is still plenty to explore. The first film has plenty more extras than the second, and to be honest the extras on Toy Story 2 were a little disappointing, but the highlight of the two discs must be the Toy Story Treats section of clips.

However, if you gone for the ultimate box-set then you'll be in heaven with a set of extras specially created for the DVD. Some of the sections involve the scrolling through pages and pages of information, which at times can be boring, but there are plenty of live action sections with heaps of useful and interesting information from the director and his various assistants. I was especially interested in the computer animation section, it is all clever stuff!

Each disc comes with an insert with the chapter lists, but there is also a short booklet which gives a brief background to the two films with comments from the director John Lasseter. However, the most interesting part of the booklet is the navigation overview of the supplemental disc. There is so much information on the third disc that it requires a map to find your way around.

If you've seen A Bugs Life and the short Geri's Game then you might have noticed that the toy repair man in Toy Story 2 is familiar. Also, Tom Hanks was reputed to have 'only' received $50,000 for his part in the first Toy Story where as this rocketed to a cool $5,000,00 for Toy Story 2. Will there ever be a Toy Story 3? I Wouldn't rule it out.

Together with the beautifully designed box-set, the fabulous animation and the utter quality of the discs and their extras, this really has to be must for everyone's DVD collection. The amount of effort put into this disc by Disney and Pixar is obvious by just looking at the supplemental disc with all the additional material and animated menus. This collection must go down as the best material on DVD yet. It really has been worth the wait!