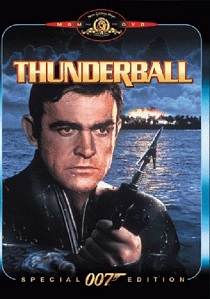 ReviewCrimeAdventure
Review Article Go back to homepage
SPECTRE has stolen two nuclear bombs from a Vulcan bomber and is holding the world to ransom in a massive 100 million pounds extortion scheme. Agent 007, James Bond, is sent in to find them before they can be used.
Sean Connery, Claudine Auger, Adolfo Celi, Luciana Paluzzi, Rik Van Nutter, Bernard Lee, Desmond Llewelyn
Action/Adventure, Crime
2
2 Hours 5 Minutes
Thank you for supporting DVD365.net when you order using the link(s) below.
Buy DVD
Story

James Bond is called in to thwart a massive extortion attempt by the evil SPECTRE after they manage to hijack a RAF Vulcan bomber along with its cargo of two nuclear warheads. Unless the governments pay the ransom fee of £100 million they will detonate these two bombs in an American and British city. Naturally, Bond has to interrupt his incessant womanising and fighting baddies and is soon on the case.

Following a hunch he ends up in Nassau in the Bahamas with beautiful scenery and women everywhere. After a number of run ins with some of SPECTRE's goons, he soon has to match his wits against SPECTRE's number two, Emil Largo, who has hidden the nuclear weapons underneath his luxury yacht.

The picture is also surprisingly good. Again, I wasn't expecting too much from the age of the film stock, especially after the relatively poor picture quality of the previous Bond films, but the picture here is bright and colourful with no artifacting and a high bit-rate throughout. However, there are still the odd whiskers and I did notice one scene at the beginning of the film where some brief pixelisation was present. This minor glitch aside, MGM must really be congratulated on the sound and picture quality of this disc.

I was truly surprised to see that the disc was encoded in Dolby 5.1 stereo. There has been a decent attempt at re-mastering the soundtrack with the occasional use of the surround channel for the effects, but it tends be used mainly by the atmospheric music. There is also a fair amount of LFE's present during explosions and other dramatic scenes, although I kept having to turn the volume up to hear the dialogue channel before diving for the remote whenever the action started.

The special effects in 'Thunderball' were just starting to bring the classic Bond films to life. Where as the previous films effects really looked like models and were, at times, quite laughable, the effects in this film are excellent for the age of the film. Indeed, the extended underwater scenes and other innovative effects won an Oscar.

Yet again MGM have come up trumps with a large number of useful and interesting extras along with outstanding picture and sound quality. Again and again, each new Bond disc just keeps getting better. It is getting harder and harder to see how MGM can surpass each Bond release with the standard of extras and picture quality. It puts many other companies to shame with their boring menus and pointless extras.